A birthday tribute to a true citizen of the world, extraordinary humanitarian, and practitioner of reverence for life.

"Reverence for life affords me my fundamental principle of morality," said Albert Schweitzer, a true citizen of the world, born on this day in 1875. By 1913, he had become three times a doctor — of philosophy, of theology, and of medicine.

Schweitzer began his career as a musician giving organ concerts throughout Europe, but after reading accounts of inhumane treatment of African natives by white people, he decided to work in Africa. In Gabon, he founded a mission hospital where he patiently served the people. In 1947, Life magazine called him "The Greatest Man in the World," and our friend Frederick Franck, an artist and philosopher, saw him as an "exemplar of the truly human." In 1953, Schweitzer received the Nobel Peace Prize. He used the money to build a leper colony for those who were rejected by their communities.

It was while traveling down the Ogowe River in 1915 that he saw a herd of hippopotamuses and embraced the ideal of "reverence for life." It enabled him to expand his circle of compassion from family, friends, and co-workers to plants, animals, and all creation. This spiritual stance wipes away old divisions and creates pathways of cooperation and empathy. Near the end of his life, Schweitzer corresponded with world leaders about the nuclear arms race and the need for world peace. He died in 1965.

Albert Schweitzer: Called to Africa, a tribute to this extraordinary humanitarian which blends interviews and reenactments of incidents in his life.

Albert Schweitzer: Essential Writings, selected with an introduction by James Brabazon, gathers materials from the writings of this gifted visionary.

Bowing is a traditional act of reverence. Show your reverence for life — for a person or an animal — by making a physical bow or an inner bow.

For more resources on the practice of reverence, visit the curated content in S&P's Reverence Project. 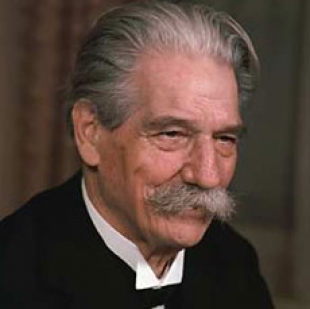