(PDP) Celebrating the pioneering work and accomplishments of the founder of the Gray Panthers (1972), a network of older people dedicated to fighting ageism.

Maggie Kuhn, the founder and outspoken leader The Gray Panthers, was born on this day in 1905. She majored in English in college and then went on to accept a job with the YWCA (Young Women's Christian Association) where she became a defender of working women and their causes. In 1950, Kuhn took an executive position with the Presbyterian Church of the USA where she was responsible for social education and action.

Asked to retire before her 65th birthday, Maggie called a meeting of others in the same boat and formed The Gray Panthers (1972), as a network of older people dedicated to fighting ageism in all of its nasty and degrading forms. Other "isms" they were against included racism, sexism, and militarism. They brought about national and local changes in nursing home procedures, health care, and forced retirement.

On her 80th birthday, Kuhn made a vow to do something outrageous at least once a week. She died at the age of 89 in 1995.

To honor and celebrate Maggie Kuhn on her birthday, do something outrageous this week and let one of these quotes from her be your guiding light in the days ahead. 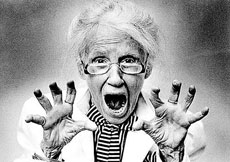