Affirming the interspiritual vision of the Benedictine monk with a reading, a screening, and a mantra.

Bede Griffiths (1906 - 1994) spent 25 years in a Benedictine monastery in England before venturing to India where he eventually set up a Christian community following the customs of a Hindu ashram. This pioneer of interspiritual awareness fashioned a theology that was cosmic, mystical, and respectful of all religions. Near the end of his life, Griffiths promoted a network of Christian meditation centers founded by John Main and was also quite taken with the emerging Green movements in Europe and America.

Griffiths' Christian faith kept evolving through the years. It was shaped by his fascination with the primal religion of India, his belief in the marriage between the masculine and feminine aspects of human nature, his attraction to perennial wisdom, and his lifelong respect for the spiritual practice of unity.

Ponder this quotation from Bede Griffiths on what we need to learn from the East:

"It is this vision of a cosmic unity, in which human beings and nature are sustained by an all-pervading spirit, which the West needs to learn from the East. It is this that explains the extraordinary sacredness which attaches to every created thing in India. The earth is sacred, and no plowing or sowing or reaping can take place without some religious rite. Eating is a sacred action, and every meal is conceived as a sacrifice to God. Water is sacred, and no religious Hindu will take a bath without invoking the sacred power of the water, which descends from heaven and, caught on the head of Shiva, is distributed in the fertilizing streams of the Ganges and other rivers. Air is sacred, the breath of life which comes from God and sustains all living creatures. Fire is sacred, especially in its source in the sun, which brings light and life to all creatures. So also with plants and trees, especially certain plants like the tulsi plant and certain trees like the banyan. Animals are sacred, especially the cow, which gives her milk as a mother, but also the elephant, the monkey, and the snake. Finally, the human person is sacred . . . a manifestation of God, but especially a holy person, in whom the divine presence can be more clearly seen."
— from Bede Griffiths: Essential Writings

Human Search: The Life of Father Bede Griffiths. This extraordinary 60-minute profile of the Christian mystic was produced and directed by John Swindells, an Australian filmmaker. Father Bede talks about this education at Oxford where he developed an interest in philosophy and literature, his experiment with communal living in the English countryside, his decision to become a priest, and his attempt to create a meeting place for East and West at an ashram in southern India. Various members of this community comment on Father Bede's teachings, spiritual practices, and impact upon their lives.

Try using a mantra from Bede Griffiths. A mantra can be a reminder of God's active presence in our world. It can be an expression of our fervent desire for a closer, more faithful and trusting relationship with God. And it can be a self-instruction. Bede Griffiths spoke the following words as he was dying: "Serve the growing Christ." This is one of our favorite Christian mantras because it revolves around the word "growing." The more we repeat it, the more we consider its implications. Try it and see how it works for you. 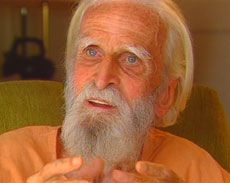