(PDP) Celebrating the life and integrity of the Nobel laureate author.

John Steinbeck, who was born on this day in 1902 and died in 1968, is remembered as one of the greatest American writers of the twentieth century, known for his novels about the challenges of American life, especially for the poor and the disenfranchised. His classic novel, The Grapes of Wrath, chronicled the plight of a family of Okies, victims of the Dust Bowl in the Midwest, through their traumatic and ultimately tragic life as migrant workers in California. It received the National Book Award for Fiction and a Pulitzer Prize for Fiction and was cited when Steinbeck won the 1962 Nobel Prize in Literature "for his realistic and imaginative writings, combining as they do sympathetic humour and keen social perception."

Other noteworthy Steinbeck books are Tortilla Flat, In Dubious Battle, The Long Valley, and The Winter of Our Discontent. Both Of Mice and Men and East of Eden were adapted into movies and television specials. His Travels with Charley, in which he recounts stories of his experiences in 40 states, is an involving and insightful portrait of America in the 1950s.

Reflect upon what you can learn about Steinbeck and his commitments from these quotes:

"A plan is a real thing, and things projected are experienced. A plan once made and visualized becomes a reality along with other realities — never to be destroyed but easily to be attacked."

"And this I believe: that the free, exploring mind of the individual human is the most valuable thing in the world. And this I would fight for: the freedom of the mind to take any direction it wishes, undirected. And this I must fight against: any religion, or government which limits or destroys the individual. This is what I am and what I am about."
— from East of Eden

"Literature is as old as speech. It grew out of human need for it, and it has not changed except to become more needed."
— Nobel Prize acceptance speech

"A journey is like marriage. The certain way to be wrong is to think you control it."
— from Travels with Charley

"I got thinkin’ how we was holy when we was one thing, an’ mankin’ was holy when it was one thing. An’ it on’y got unholy when one mis’able little fella got the bit in his teeth an’ run off his own way, kickin’ an’ draggin’ an’ fightin’. Fella like that bust the holi-ness. But when they’re all workin’ together, not one fella for another fella, but one fella kind of harnessed to the whole shebang — that’s right, that’s holy."
— from The Grapes of Wrath

Spend some time today reading one of Steinbeck's books – either from your own library or at the public library or from excerpts you find online. Here is a Reader's Guide on The Grapes of Wrath prepared for Spirituality & Practice's We the People Book Club that includes some key passages from that book.

You will easily be able to find Steinbeck's views on the concentration of wealth and power and the exploitation of the poor. Do you find these descriptions relevant today? If so, what echoes can you find in the current socio-economic reality?

With urgency and insight, John Steinbeck used fiction to intervene in the twentieth century’s worst environmental, economic, and social crises. So often it is possible not to see the hunger and other suffering that is in fact quite close to us in one way or another: close because our traditions tells us we are all brothers and sisters, close because it’s on the commute to work, or close because the politics or ideals we hold dear point us in its direction.

Practice seeing the suffering that wants to make a claim on your generosity, your schedule, your comfort today. With detachment and without self-judgment, name the things that keep you from responding. It might help to identify a particular scenario in your mind. 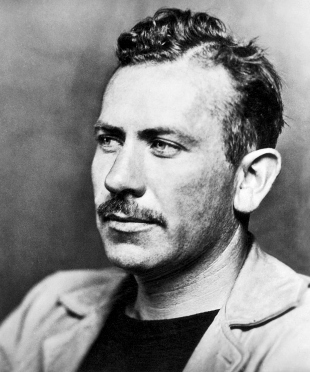 We the People Book Club Guide: The Grapes of Wrath