(PDP) A tribute to the Presbyterian minister best known for the Mister Rogers' Neighborhood television show.

Born in Latrobe, Pennsylvania, Fred Rogers (1928 - 2003) began playing piano at an early age and graduated from Rollins College in Florida in 1951 with a degree in musical composition. Interested in child development and how television was being directed at children, he was hired to work in programming by WQED in Pittsburgh, a community TV station. He worked as a puppeteer on a local show called The Children's Corner.

Still not completely sure of the direction of his work in the rapidly growing medium of television, Rogers decided to study for the ministry at Pittsburgh Theological Seminary; he was ordained a minister in the United Presbyterian Church in 1963. The church approved his desire to continue working in the media for children and families. In 1968, he became the creative mastermind behind Mister Roger's Neighborhood; he wrote the scripts and songs and served as the host, head puppeteer, and producer.

Those familiar with this staple of children's programming recall that every show began with Mister Rogers walking through the door of his television house and putting aside his raincoat and suit jacket for a zippered sweater. By 1984, one of his famous sweaters was put on exhibit at the Smithsonian. 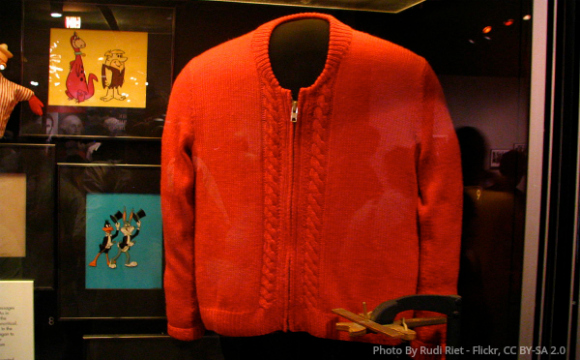 Rogers wrote 200 songs for the show, including the theme "It's a Beautiful Day in the Neighborhood." He served as chairman of a White House forum on child development and the mass media. Over the years, he was honored with numerous awards and acclaim for his steady and inspirational dedication to children via television. Mister Rogers' Neighborhood won four Emmy Awards, and Rogers received a Lifetime Achievement Award at the 1997 Daytime Emmy Awards.

These honors never went to his head. When introduced to the TV Hall of Fame (see video below), he observed that "fame is a four-letter word and like tape, or zoom, or face, or pain, or life, or love, what ultimately matters is what we do with it." What Fred Rogers did with fame was to appear before the U.S. Senate Subcommittee on Communications to support funding for public broadcasting; to tape public service announcements for parents after the September 11 terrorist attacks, sharing how to talk with children about what had happened; and to advise people after the Sandy Hook Elementary School shooting to "look for the helpers." What he did with fame left a deep imprint on the hearts of anyone who had the honor to witnessing his complete sincerity, integrity, and love, rare to find in such pure forms.

Which of the following quotes by Fred Rogers moves you most? Carry it with you today — in your heart or on a note in your pocket — as a reminder of how we're meant to treat one another.

"Children are to be respected and I respect them deeply. They've taught me an awful lot."
— In an interview with Joan Rivers on The Tonight Show, 1983

"You know, I think everybody longs to be loved, and longs to know that he or she is lovable. And, consequently, the greatest thing that we can do is to help somebody know that they're loved and capable of loving."
— Fred Rogers: America's Favorite Neighbor (television documentary), 2003

"Our world hangs like a magnificent jewel in the vastness of space. Every one of us is a part of that jewel. A facet of that jewel. And in the perspective of infinity, our differences are infinitesimal."
— Commencement Address at Dartmouth College, June 2002

"When I was a boy and I would see scary things in the news my mother would say to me, 'Look for the helpers. You will always find people who are helping.' To this day, especially in times of 'disaster,' I remember my mother's words, and I am always comforting by realizing that there are still so many helpers — so many caring people in this world."
— in Let's Make the Most of this Beautiful Day from Papersalt publishers

"I believe that appreciation is a holy thing, that when we look for what's best in the person we happen to be with at the moment, we're doing what God does; so in appreciating our neighbor, we're participating in something truly sacred."
— Commencement Address at Middlebury College, May 2001

In his June 2002 commencement address at Dartmouth College, Mister Rogers asked, "Who are those who have helped you become the person that you are? Anyone who has ever graduated from a college, anyone who has ever been able to sustain a good work, has had at least one person and often many who have believed in him or her. We just don't get to be competent human beings without a lot of different investments from others."

Close your eyes for a few moments and recall with gratitude those who have believed in you and helped you on your way. You may even feel inspired to write a note of appreciation to someone whose investment in you made a big difference.

This six-minute video of Fred Rogers' induction into the television Hall of Fame reminds us of the choice each of has each day, "to demean this life or to cherish it."

Film: Won't You Be My Neighbor?

Film: Mister Rogers and Me