(PDP) Remembering the English novelist, journalist, and critic famous for his allegorical Animal Farm and dystopian 1984.

George Orwell — a pseudonym for Eric Blair — was born on this day in India in 1903 to a family he describes in The Road to Wigan Pier (1937) as "lower-upper middle class." In 1904, his mother brought him to England, where he was raised and educated. He took a job with the Indian Imperial Police in Burma, then lived in Paris and London, taking menial jobs and writing. His first book, Down and Out in Paris and London (1933), is a travelogue and a memoir of his near destitution.

By the 1930s, Orwell had begun to think of himself as a socialist. In 1936, he wrote The Road to Wigan Pier: The first part describes the lives of unemployed miners during the Depression in northern England, and the second part is about his upbringing and growing political awareness. He traveled to Spain later that year to fight against Franco's nationalists in the Spanish Civil War, the subject of Homage to Catalonia (1938). Wounded in the throat by a sniper, he barely escaped death. He evaded arrest by Soviet-backed communists during a purge of revolutionary socialist dissenters in Barcelona, which made him a lifelong anti-Stalinist.

He became a prolific journalist and continued working on books. In 1945, he published Animal Farm, an anti-totalitarian satire told as a fable about farm animals. 1984, published in 1949, imagined a dystopian, repressive future characterized by governmental overreach and filled with now famous — and ever-more relevant — words and phrases like "Big Brother is watching you" and "newspeak."

By the time Orwell died of tuberculosis the following January, he was a world-famous journalist and author. In an essay called "Why I Write," Orwell explained, “My starting point is always a feeling of partisanship, a sense of injustice. When I sit down to write a book, I do not say to myself, ‘I am going to produce a work of art.’ I write it because there is some lie that I want to expose, some fact to which I want to draw attention, and my initial concern is to get a hearing. But I could not do the work of writing a book, or even a long magazine article, if it were not also an aesthetic experience.”

Which of the following quotes by George Orwell most startles or moves you? Why? You may want to reflect on its meaning throughout the day.

"It is not possible for any thinking person to live in such a society as our own without wanting to change it."
— in "Why I Joined the Independent Labour Party," New Leader (June 24, 1939)

"War against a foreign country only happens when the moneyed classes think they are going to profit from it."
— in a review of The Men I Killed by Brigadier-General F. P. Crozier in New Statesman and Nation (August 28, 1937)

"If liberty means anything at all, it means the right to tell people what they do not want to hear."
— Original preface to Animal Farm; as published in George Orwell: Some Materials for a Bibliography (1953) by Ian R. Willison

"Threats to freedom of speech, writing and action, though often trivial in isolation, are cumulative in their effect and, unless checked, lead to a general disrespect for the rights of the citizen."
— in "The Freedom Defence Committee" in The Socialist Leader (September 18, 1948)

"I always disagree, however, when people end up saying that we can only combat Communism, Fascism or what not if we develop an equal fanaticism. It appears to me that one defeats the fanatic precisely by not being a fanatic oneself, but on the contrary by using one's intelligence."
— Letter to Richard Rees (3 March 1949), The Collected Essays, Journalism and Letters of George Orwell, Vol. 4: In front of your nose, 1945-1950 (1968), ed. Sonia Orwell and Ian Angus

"On each landing, opposite the lift-shaft, the poster with the enormous face gazed from the wall. It was one of those pictures which are so contrived that the eyes follow you about when you move. 'BIG BROTHER IS WATCHING YOU' the caption beneath it ran."
— in 1984

"It was always at night — the arrests invariably happened at night. The sudden jerk out of sleep, the rough hand shaking your shoulder, the lights glaring in your eyes, the ring of hard faces round the bed. In the vast majority of cases there was no trial, no report of the arrest. People simply disappeared, always during the night. Your name was removed from the registers, every record of everything you had ever done was wiped out, your one-time existence was denied and then forgotten. You were abolished, annihilated: vaporized was the usual word."
— in 1984

"As Clover looked down the hillside her eyes filled with tears. If she could have spoken her thoughts, it would have been to say that this was not what they had aimed at when they had set themselves years ago to work for the overthrow of the human race. These scenes of terror and slaughter were not what they had looked forward to on that night when old Major first stirred them to rebellion. If she herself had had any picture of the future, it had been of a society of animals set free from hunger and the whip, all equal, each working according to his capacity, the strong protecting the weak, as she had protected the lost brood of ducklings with her foreleg on the night of Major's speech. Instead — she did not know why — they had come to a time when no one dared speak his mind, when fierce, growling dogs roamed everywhere, and when you had to watch your comrades torn to pieces after confessing to shocking crimes."
— in Animal Farm

In The Opposing Self, American literary critic and essayist Lionel Trilling wrote, "If we ask what it is [Orwell] stands for, … the answer is: the virtue of not being a genius, of fronting the world with nothing more than one’s simple, direct, undeceived intelligence, and a respect for the powers one does have. … He implies that our job is not to be intellectual, certainly not to be intellectual in this fashion or that, but merely to be intelligent according to our own lights — he restores the old sense of the democracy of the mind, releasing us from the belief that the mind can work only in a technical, professional way and that it must work competitively."

Take an inventory of the powers you have. How can you use them — simply, respectfully, directly — to leave a beneficial mark on the world? 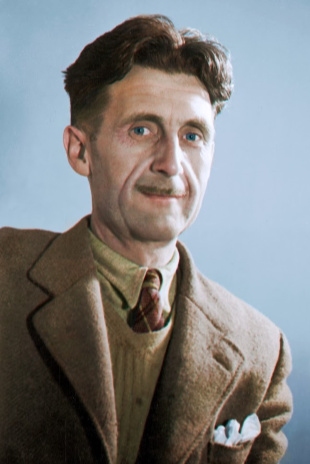