Guides to "We the People" book selections.

The We the People Book Club, sponsored by The Practicing Democracy Project, uses American literature to explore the values and visions of American life. The selections for the program (originally run September 2018 - August 2019 and now available for self-guided study) chronicle the last century of American thought and explore such themes as individualism and communalism, difference and unity, law and justice, the "stranger," and the spiritual values of resilience, compassion, hospitality, freedom, equality, and civility. There are two ways to participate:

1. Sign up for the on-demand version of the program: You schedule to receive emails with commentary and practice suggestions for the 12 books at the pace that works best for you. For more information on how this works and to sign up, go to this page:
www.SpiritualityandPractice.com/JoinWethePeopleBookClub

Julia Davis, who is creating the guides and leading the online discussion, explains her criteria in choosing the books for the We the People Book Club: "Some of these are my favorite books because they are so very honest about where we are in relation to our ideals. They hold up tough love as a form of patriotism and, hopefully, inspire in their readers compassionate action as an alternative to a feeling of powerlessness."

Davis, a fellow with The Practicing Democracy Project, holds an M.A. and C. Phil. in English and American Literatures and Cultures from Brown University and has 17 years experience teaching American literature at the college and high school level. 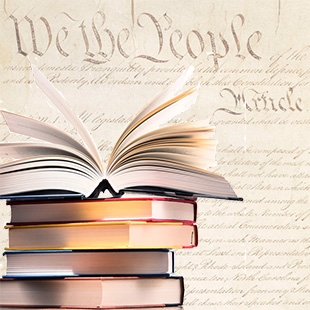