"Silence has been the most valuable and instructive of the spiritual practices that have been part of my Interspiritual journey. In fact, I have come to view silence as the practice that is most inherently Interspiritual in nature — meaning, that it provides the most universal container for mystical experience, as well as serves as the most universal language that can be spoken between a mystic of any tradition and the Ineffable One she or he seeks to know. Certainly this has been true for me. Silence has been and continues to be the primary catalyst for my own process of Interspiritual maturation.

"My practice of silence has included many intentional forms, such as choosing to take part in a 10-day silent meditation retreat or joining others in a moment of silence during a worship service or silently 'holding space' for a collective purpose or situation (as I did for the Nine Elements retreat in Kentucky, when I was unable to attend due to illness). But my most dramatic and instructive experiences of silence have been those of the capital S category, when Silence has chosen me.

"Silence has a penchant for seeking out and seducing the mystically inclined, which is how it was for me — a gradual, but inevitable seduction. It began simply enough — the unexpected gift of a few seconds of quiet mind in my very first meditation experience. Now, more than 25 years since that first taste, Silence weaves through everything I think, feel, say and do. I'm never unaware of its presence, and this relationship with Silence has been essential in bringing me to the Interspiritual path — in fact, I think of it as a 'divine conspiracy' perpetrated between the two (with many willing accomplices also helping along the way).

"When I first touched into those few seconds of silence in my early forties, during a meditation class I took to help me cope with some stressful life events, it was so profound, even though brief, that I resolved then and there, to meditate daily for the rest of my life. Over time, the periods of inner quiet grew longer and led to many positive changes, inner and outer — including improvements in my health, career and relationships as well as the opportunity to teach others to meditate. But after a few years, I began to feel a call to find a more consciously spiritual context to what I was experiencing and teaching. This longing led me, over the course of a decade, to a Hindu spiritual teacher at an ashram in upstate New York, to the silent meditation group of a Sufi spiritual teacher on the Northern California coast, and to a Catholic-affiliated hermitage in the hills overlooking Sonoma Valley, California.

"These three places and the traditions — Hinduism/Yoga, Naqshbandi Sufism and Catholic Christianity — that they represent have served as cauldrons for my evolution from spiritual seeker to Interspiritual mystic. In every case, the single most potent ingredient in the spiritual stew they offer me is Silence." 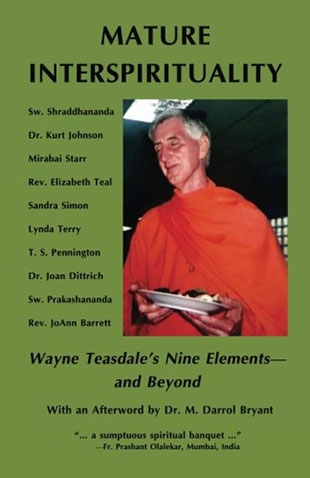