The Story of Stuff How Our Obsession with Stuff Is Trashing the Planet, Our Communities, and Our Health - And a Vision for Change

By Annie Leonard
A comprehensive and accessible critique of our model of economic growth and how we can transform our society to one of more sustainability and social equity.

Annie Leonard has spent nearly two decades investigating environmental health and justice issues. She has traveled to 40 countries, visiting where what she calls our "Stuff" is made and dumps where our Stuff goes when we throw it away. Having witnessed firsthand the horrendous impact of global consumption patterns, Leonard is fiercely dedicated to reclaiming and transforming our industrial and economic systems so they serve, rather than undermine, ecological sustainability and social equity.

Annie Leonard is the author and host of the online film "The Story of Stuff" (www.storyofstuff.com), a fast-paced, fact-filled 20-minute expose of the hidden environmental and social costs of our current systems of production and consumption. The film has become an Internet phenomenon, generating over 10 million views in 200 countries since its launch in 2007. It has been used by faith-based communities, environmental organizations, and local governments to generate dialogue on the important environmental and social issues of the day. The change that Leonard is seeking must be initiated by individual citizens and large organizations working together to save the imperiled world.

"We depend on this planet to eat, drink, breathe, and live. Figuring out how to keep our life-support system running needs to be our number-one priority. Nothing is more important than finding a way to live together — justly, respectfully, sustainably, joyfully — on the only planet we can call home," writes Leonard in this comprehensive and accessible examination of our present situation. She makes a trenchant critique of our underlying paradigm of economic growth and then gives us a fascinating look at the journey of Stuff (manufactured or mass-produced goods) in a series of chapters on Extraction, Production, Distribution, Consumption, and Disposal.

Leonard makes clear at the outset that she's not against Stuff, isn't romanticizing poverty, and doesn't see herself as bashing America. Throughout the book, the author includes helpful material under two graphics: A Sign of Hope and Another Way (alternatives). We were very impressed with Leonard's creative and thoughtful assessment of three essential resources that demand our attention: trees, rocks, and water.

In "Production," the author spins out an incredible story of what goes into a simple cotton T-Shirt that seems like such a great piece of clothing. We sure didn't know that cotton seeds are dumped in fungicide and then sprayed with pesticides several times over the course of the season. And, of course, these toxic chemicals often have dire effects on those who work in the cotton fields. Since our cotton T-Shirt is white, it undergoes bleach and chlorine treatments and then moves on to factories where workers can receive as little as 13 cents an hour in wages. By the time it travels to a store, it has journeyed thousands of miles and generated 5 pounds of carbon dioxide in its creation and delivery. That is why Leonard suggests purchasing organic and fair trade cotton products or wearing the one you have until it fades away into a cloth you can use for cleaning other Stuff in your home.

The Stuff Index
(with a hat tip to Harper's magazine)

"Pieces of junk mail delivered to U.S. households each year: more than 100 billion

"Amount thrown away without being opened: 44 percent

"Height of a wall, New York to Tokyo, that could be built with paper consumed yearly in the U.S.: 10 feet

"Amount of water used to grow, produce, package and ship the beans for a cup of coffee: 36 gallons

"Amount of water per person used every day in the U.S. to water lawns: 200 gallons

"Rank of lawn grass among irrigated crops in the U.S.: 1

"Number of T-shirts for each person on Earth that could be made from global cotton production: 15

"Proportion of African Americans and Latinos living in communities with unregulated toxic waste sites: 3 out of 5

"Estimate of aluminum cans thrown in landfills since 1972: more than 1 trillion

"Value, in today's scrap metal prices, of those cans: $21 billion

"Amount spent in that period on higher education: $99 billion

"TV commercials seen per day by the average U.S. child: 110

"Added consumer spending a year for each 5 additional hours of TV watched per week: $1,000

"Municipal solid waste produced each day in 2007 by the average American: 4.6 pounds

"Number of electronic products thrown out in the U.S. every year: about 400 million

The author traces the environmental impact of making books, computer chips, and aluminum cans. She takes a hard look at the toxic ingredients of cosmetics, breast milk, and the air around toxic facilities which are usually established in communities of color. Leonard ranges far and wide in her discussion of superstores, overconsumption and an unhappy nation, planned obsolescence of products, the relentless advertising to children, electronic waste, and recycling.

The book closes on an up-tempo note where the author alludes to living in a community where she and her neighbors share many items that would normally be purchased for every home. The results are saving money and resources and having more fun. Leonard points to WiserEarth, a huge online data base created by Paul Hawken, which includes about a million organizations working for environmental and social justice. Also presented is a list of four necessary paradigm shifts:

1) Redefine progress.
2) Do away with war.
3) Internalize Externalities.
4) Value time over Stuff.

Check out the appendixes where you will find a list of promising policies, reforms and laws matching the five stages in The Story of Stuff; recommended individual actions; and a sample letter to PVC retailers, manufacturers, and lobbyists. 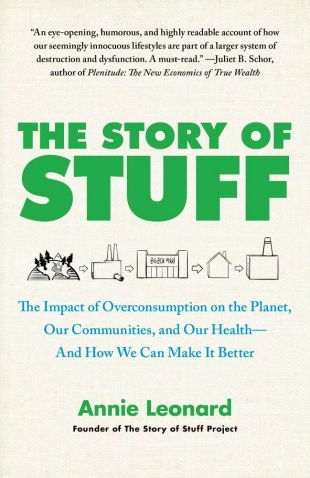