By Ann Maisel, Eric Maisel
An exploration of the creativity involved and challenges and myseries of following productive obsessions.

In Defending Your Life, one of our favorite movies, Bob Diamond informs some new arrivals in the afterlife's Judgment City that Earthians only use two to three percent of their brain power and are jokingly called "little brains." Many cognitive scientists would agree with the first part and probably not mention the second part. Our brains could be put into high gear but that will not happen with conventional thoughts or unproductive obsessions like winning the lottery or getting rid of wrinkles.

In this snappy book, Eric Maisel, a psychotherapist and a creativity coach, explores the value and exhilaration of what he calls "productive obsessions." This needs to be a big idea such as getting libraries funded in Third world countries or, on our case, creating a series of 37 books on spiritual practices or putting our database of 30,000 quotations online. The authors' advice:

"Live up a storm. A brainstorm. Or rather, a series of brainstorms: one after another, season after season, year after year. When you engage your mind with an idea ripe enough to drip juice, large enough to fill an auditorium, fascinating enough to seduce, gripping enough to hold you enthralled, you scoot boredom out the door, make sense of your days, and live your reasons for being."

Maisel suggests that we choose an obsession that is grand, good, goal-oriented, growth-inspiring, and gutsy that makes full use of our talents and abilities. He presents an overview of one month of productive obsessing with commentary on endurance, risk, commitment, passionate interest, and process. Along the way Maisel shares profiles and vignettes of creative people who have followed, and in many cases, fulfilled their dreams. 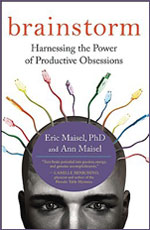