Cognitive Surplus Creativity and Generosity In a Connected Age

By Clay Shirky
A visionary and incisive work on the online sharing and caring going on thanks to more time, energy and creativity.

Think about. How much time have you spent in your life watching television? Many have complained that being a passive couch potato siphoned away precious time that could have been spent with their family and friends. Someone born in 1960 may have watched fifty thousand hours of TV already.

Clay Shirky teaches at the Interactive Telecommunications Program at New York University and is the author of Here Comes Everybody: The Power of Organizing Without Organizations. In this visionary work, he takes a hard look at television, time, the rise of social media (Facebook, My Space, Twitter, YouTube), and the collaborative efforts of creativity and generosity it has spawned.

"In the space of a generation, watching television became a part-time job for every citizen in the developed world," he writes. But now cohorts of people are watching less TV than their elders and are engaged with one another on the Internet. In 2010 the global Internet-connected population will cross two billion people. And many of these individuals are voluntarily creating and sharing things. Ask them why they are spending so much time connected in this way and they, no doubt, will respond that people have always found time to do things that interest them. Shirky quotes a character in Kurt Vonnegut's The Sirens of Titan: "The worst thing that could possibly happen to anybody would be to not be used for anything by anybody."

The liberation of ordinary citizens from dozing in front of TV has resulted in a cognitive surplus — a new burst of intellect, energy and time— that enables them to pursue activities they like or care about: "The wiring of humanity lets us treat free time as a shared global resource, and lets us design new kinds of participation and sharing that take advantage of that resource." Shirky shares relevant examples from Wikipedia (reference tool), Ushahidi.com (Kenyans reporting human rights violations), PickupPal.com (a carpooling site), ICanHasCheezburger.com (people sharing funny animal videos), Grobanites for Charity (fan club raising money to help others), Napster (site for music sharing), Responsible Citizens (cleaning up trash), PatientsLikeMe (health site offering information and support), CouchSurfing (a social network for travelers), and others. All these examples point to the diverse, large, and unending stream of people involved in collaborative efforts to create a better world.

Want to make your thoughts globally available? Take three minutes to express yourself and press a button and it's out there. Interested in supporting animal rights or peace activists, join a group of people who share your commitment and enthusiasm. Share your creativity by contributing a poem to a site that gathers new verse. Put together your own video and post it on YouTube. Speak out against whatever brings your righteous indignation to a boil. The possibilities for connecting with others are endless, and people now have the time and the confidence to be both creative and generous in 10,000 ways. It's all part of the cognitive surplus of our time which Clay Shirky has so brilliantly described in this incisive book. 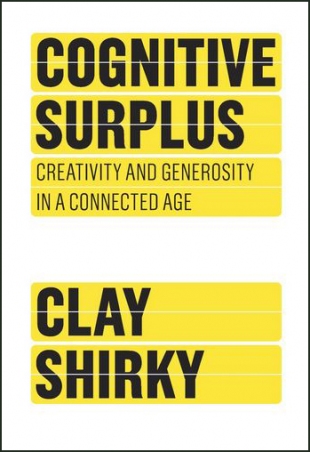