Astra Taylor is a writer, documentary filmmaker (Examined Life), and activist (she helped launch the Occupy offshoot Strike Debt). As a creative person with high hopes of making an impact, the author thought that the Internet would free us from the control of giant corporations. We had the same hopes, but it seems to have fallen into the same traps as the old media; the Internet is now dominated by Amazon, Apple, Google and Facebook. It looks different at first glance but beneath all the rhetoric about openness, transparency, and participation lies the intention of these tech companies to monetize every click we make on our computers.

Taylor tries hard to avoid the Manichean view of technology "which assumes either that the Internet will save us or that it is leading us astray, that it is making us stupid or making us smart, that things are black and white." In telling the story of how Amazon, Google and others have succeeded in coming up with ways to dominate the globe, she talks to both cheerleaders for this campaign and critics of the Internet-based media giants.

Elsewhere in this always thought-provocative book, Taylor examines:
• the complete loss of leveling the field between the small and the large
• the lack of any gatekeepers to monitor what is going on
• "the crumbling and hollowing out of established cultural institutions, from record labels to universities"
• the shafting of interns
• the ascendance of the crowd-mind over the individual
• online's increasing dependence on free labor
• the dilemma of what to do with the 200,000 undergraduates who are now majoring in journalism in the United States
• what it means that a large number of Internet users want is "the cultural equivalent of a warm bath:
• the reality that in 2010 ten websites accounted for 75 percent of U.S. page views
• the continuing debate over copyright — to eliminate it or not
• the controversies connected with privacy
• the dreams of those who want a more government-funded media which would support and extend serious documentaries and old-fashioned investigative journalism.

It is not a long step from Astra Taylor's disappointment with the commercialization of the Internet to the wide range of fears that parents have nowadays about the Internet and their teenage children. In this article from The Telegraph website, Jane Mulkerrins interviews Danah Boyd, "digital anthropologist" and the author of It's Complicated: The Social Lives of Networked Teens (Yale University Press, 2/14 hardcover, $25 ISBN 9780300166316 ).

Boyd wants to assuage parents who are worried about the dangers of cyberbullies, online pornography, and sexual predators. She reminds them that since the term "teenager" was coined, fathers and mothers have always reacted negatively to youth culture and their immersion in music, dance and the search for thrills and adventure. We saw historical evidence of this in the film Teenage.

In her book, Boyd interviews 166 teenagers across America and discovers that they are interested in what kids their age have always been keen on: relating to their peers, finding ways to creatively express themselves, and talking freely. The social media offer one of the few places they can be with their friends:

"Teens have fewer and fewer places to be together in public than they once did. Many shopping malls, for example, once the refuge of idling adolescents, now ban groups of youths. And teenagers, particularly from middle-class families, have after-school hours and weekends crammed with homework, classes, clubs and sports, leaving little time for lolling about.

"Teens told me time and again that they'd far rather meet in person, but the heavily scheduled nature of their lives, plus their lack of physical mobility and their parent's fears have made face-to-face interactions increasingly impossible."

It is clear that kids yearn for privacy and this is a right that parents must respect. Boyd counsels parents not to get to bent out of shape when their daughters act out the "sexual performativity" they pick up from the media. "Teens are just recreating what they see celebrities do." 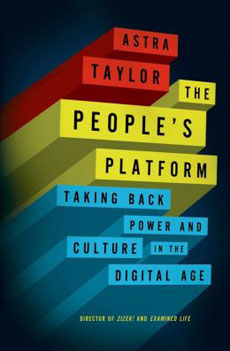