By Philip Goldberg
A map of the amazing, expansive, and eclectic impact of the Indian Vedic tradition in America.

Philip Goldberg is the author of nineteen books, including Roadsigns: On the Spiritual Path. Based in Los Angeles, he is an ordained interfaith minister, a public speaker and seminar leader, and the founder of Spiritual Wellness and Healing Associates. He is director of outreach for SpiritualCitizens.net and blogs regularly on religion for the Huffington Post.

In this bellwether book, Goldberg maps the spiritual clout of Hinduism in the West. Whereas Americans have not been enchanted with the many gods and goddesses or the rituals and complex mythology of Hinduism, they have been attracted to Vedanta philosophy and the meditation and yoga practices that go along with it. In this religion, experience takes precedence over belief or dogma.

Among the first to discover the riches of Vedanta (the teachings of the Upanishads, the Brahma Sutras, and the Bhagavad Gita) were Ralph Waldo Emerson, Henry David Thoreau, and other Transcendentalists. They along with later pre-eminent spiritual teachers such as Aldous Huxley, Huston Smith, and Joseph Campbell were sympathetic to the Hindu understanding of the Oneness which undergirds all the world's religions. Hinduism spawned a perennial philosophy which turned out to be very appealing to Madame Blvatsky, Mary Baker Eddy, Rudolf Steiner. and their followers. In our times, it is evident in the thinking of New Thought communities.

Indian spirituality morphed into guru-centered groups after Swami Vivekananda spoke at the 1893 World Parliament of Religions in Chicago. Swami Yogananda also opened many doors for Hindus with his Self-Realization Fellowship. But the most wide-ranging impact of teachers from abroad came in the 1960s and 1970 with Swami Muktananda, Sri Chinmoy, the Maharishi, and many others. Vedanta and yoga spoke to the yearnings for peace of mind and personal transformation of the countercultural Baby Boomers.

Goldberg salutes the positive influences of the Vedic tradition with its emphasis on the mind-body relationship, the direct experience of the Divine, the honored place of mystery, and the unity-in-diversity perspective. He also covers the shadow side of guru-disciple relationships with a chapter titled "Sex, Lies, and Idiosyncracies."

With great elan, Goldberg maps the musicians and writers who popularized the many creative channels of Vedic transmission. Here you will find material on movies, kirtan, verse, and novels. He accentuates the Vedic legacy and its contributions to the rapprochement between science and spirituality along with the burgeoning interest in mysticism.

In sum, Vedanta-Yoga is making a significant contribution to American life, as illustrated by all the seekers searching for the oneness of spirituality, the $6-billion-a-year yoga industry serving 16 million practitioners, and the widespread cultural interest in meditation as a healing tool for mind, body, work and relationships. 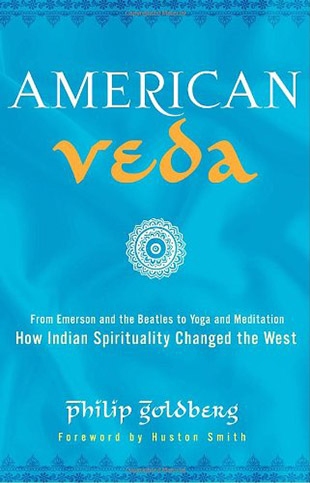