In God's Holy Light Wisdom from the Desert Monastics

By Joan Chittister
Commentaries on the teachings of the Olympians of the spiritual life.

Joan Chittister is a Benedictine sister, the author of more than 50 books, and the Executive Director of Benetvision, a resource and research center for contemporary spirituality. She is profiled as one of S&P’s Living Spiritual Teachers and is a frequent leader of our e-courses.

In God’s Holy Light: Wisdom From the Desert Monastics gives us Chittister's take on the wisdom teachings of the Desert Fathers and Mothers who lived in the Egyptian wastelands between the third and fifth centuries. She calls them "the Olympians of the spiritual life." They separated themselves from the world, denied the desires of the flesh, and sought to sanctify their bodies through rigorous practices of self-denial. Yet these monks were considered to be revered spiritual teachers: they became "the mystics, the spiritual directors and the counselors of the age." People came from near and far to hear a word from them that would be a catalyst for their transformation.

Chittister comments on about 35 of the more than 2,000 sayings from this Christian tradition. Some of them will be very familiar to spiritual seekers while others will be new; each and every one of them is edifying. Here is an oldie but goodie:

"Some old men came to see Abba Poeman, and said to him: 'Tell us, when we see brothers dozing during the sacred office, should we pinch them so they will stay awake?' The old man said to them: 'Actually, if I saw a brother sleeping, I would put his head on my knees and let him rest.' "

This Desert Father stifles the religious judgments of the old men who come to see him. He admonishes them to act with empathy and compassion rather than a works righteousness approach which leads to hurt and disappointment. The truly spiritual life stems from the actions of the heart.

We are entranced by the wisdom of these Desert Fathers and Mothers which shines through their teachings on single-mindedness, perseverance, sanctity, humility, a contemplative consciousness, the value of routine, self-control, peace of mind, generosity, and pacifism.

Here is a less familiar passage that speaks to our times:

"Abba James said: 'We do not want words alone, for there are too many words among people today. What we need is action, for that is what we are looking for, not words that do not bear fruit.' "

Then as now, we are inundated by words and more words. The anecdote then and now is action. Spiritual activism is what can make a difference. It is where the tire hits the road and where the faith leads. 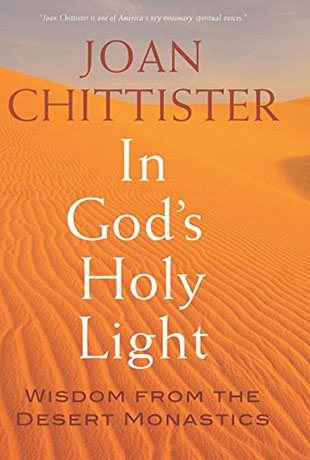