Who Rules the World?

By Noam Chomsky
A keen overview of the United States as a superpower, presented with both tenacity and prophetic insight.

Noam Chomsky is the author of numerous bestselling political works including Hegemony or Survival, Failed States, and On Western Terrorism. A professor emeritus of linguistics and philosophy at MIT, he is widely credited with having revolutionized modern linguistics.

Who Rules the World? is a rousing collection of previously published essays. With great reserves of tenacity and prophetic insight, Chomsky comes across as an intellectual activist with a keen overview of American domestic and foreign policy. Anyone seeking a map to the dangerous and uncertain times in which we live thanks to the U.S.'s militaristic emphasis and its refusal to tackle the problem of global warming will want to read this book.

America's military adventures date back to the involvement in the Vietnam War, the Bay of Pigs, the Central American follies of the 1980s, and the 2003 invasion of Iraq. Here Chomsky is highly critical of the dirty wars south of the border and the reckless deaths of noncombatants in the global use of drones. The attacks in Yemen and Somalia ignore international standards of human rights. These acts only serve to enflame the terrorist organizations and fuel their recruitment of more people to their causes.

With outrage, Chomsky delves into such controversial events as the torture memos and American amnesia, the dangers growing out of aggressive collaborations between Israel and the U.S., the expanding class war, the toll of corporate growth and the efforts to keep this secret, and the continuing insanity of nuclear weapons and the dangers they present. Ever since the end of the Cold War, the power plays of the military establishment have dominated international politics. Chomsky suggests that instead of asking the question "Who rules the world?" we should be posing a far more probing question, "What principles and values rule the world?" 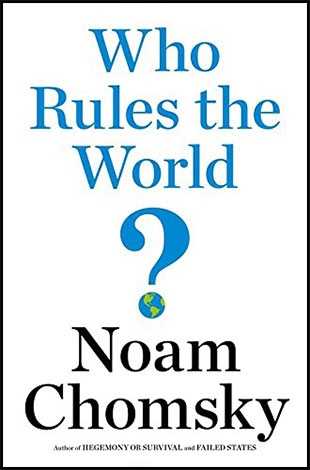