Age of Anger A History of the Present

By Pankaj Mishra
A fascinating analysis of the historical roots and present day impact of anger upon the world.

According to Pankaj Mishra, a columnist for Bloomberg View and The New York Times Review, we live in an age of anger where the incidents of atrocity, beheadings, assassinations, terrorist bombings, and the tortures of prisoners has alternated with the racism, misogyny, and demagoguery in political discourse.

The trickle-down theory of economic growth has failed miserably to ease the economic gap between the rich and the powerful and the poor. Add to this dastardly mix of events the bigoted treatment of immigrants and gay people all over the world, and you begin to feel the pervasive panic in the air all around us.

Mishra sums it all up with this: "The history of modernization is largely one of carnage and bedlam."

The author is convinced that this anxiety-producing state of affairs has its genesis in the eighteenth century clash between the Genevan philosopher Jean-Jacques Rousseau and Voltaire, a liberal believer in the reign of the elites in Paris. Mishra makes the connection between then and now: "The sense of being humiliated by arrogant and deceptive elites was widespread, cutting across national, religious and racial lines." The victims of inequality became susceptible to demagogues. With modernization, the discontent only grew.

Mishra has done an incisive job in depicting how anger and hatred have rocked individuals and nations around the world bringing chaos, paranoia, and a pervasive panic into the lives of everyone. 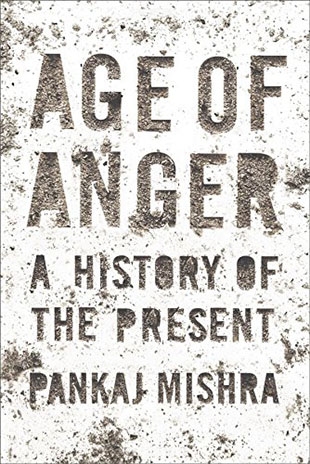