The New Childhood Raising Kids to Thrive in a Connected World

By Jordan Shapiro
A thrilling and prescient book that enhances and enriches our understanding of what it means to live in a connected world.

"Johan Huizinga, an influential cultural historian from the first half of the twentieth century, wrote, "There is no formal difference between play and ritual." He sees religious rituals, political rituals, and social rituals as a form of play. To understand what Huizinga means, think about when you go through a rite of passage. Consider that you are actually role-playing. For instance, when you participate in a wedding ceremony, there are certain lines you're supposed to say, places you are expected to walk, specific manners of behavior. You are playacting within a set of boundaries. You are following the unseen rules of the game. In fact, when any of us participates in a ritual — jury duty, the Pledge of Allegiance, a baptism, Thanksgiving dinner, a school dance, and so on — we are going through the motions of a specific narrative; we are acting out a story. The same is true when we play video games."

This cogent illustration comes from the fertile mind and hospitable spirit of Jordan Shapiro who describes himself as a public intellectual expert on 21st century parenting and global education. He's currently Senior Fellow for the Joan Ganz Cooney Center at Sesame Workshop and Nonresident Fellow with the Center for Universal Education at the Brookings Institution. He teaches in Temple University's Intellectual Heritage Program, and he wrote a column for Forbes on global education, digital play, and family life from 2012 to 2017.

According to Common Sense Media, in 2017 teens and tweens spent, on average, a little over two hours a day with screen media. The author sees video games as the primary form of narrative in our times, spawning fresh forms and methods of storytelling. The experiences that are gained through the constant use of digital interactive media open up new doors into the multidimensional world; its chief benefit is connectedness.

Given these benefits of new technologies, Shapiro rejoices in the fact that entire generations are reaching adulthood with a unique set of seminal experiences. Sadly enough, concerned parents, teachers, and caregivers often see digital play as a negative force in their children's lives, causing addiction, lack of social abilities, isolation from the real world of face-to-face encounters, depression, and an alienation from the outdoor world of nature. Shapiro responds:

"The screen-averse attitude is about values, principles, and cultural customs. It's a moral and ethical position. It's grounded in beliefs about the proper and improper ways of living a good life. It may be framed as if it were objective, as if it were about physical or mental health; but the real problem is that gown-ups are resistant to change. They are anxious about their kids' adjustment."

Shapiro, the father of two sons who are avid users of video-games, advocates that parents become co-viewers with their offspring as they share ideas and feelings. Using key insights from psychologists such as Carl Jung, Jean Piaget, D. W. Winnicott, and others, the author makes the case against technophobes who are frightened about the future and imprisoned in the past.

With immense creative daring and passion, Shapiro points out more advantages of games, such as their immersive nature which enables users to become literate in the habits and customs of their surroundings. They also offer opportunities to explore life-skills (self-regulation and executive function) which, in turn, spur the developing sense of self in teens.

Shapiro earns his description of himself as American thought leader by his culturally rich examinations of the changes —the different ways of thinking, living and learning — brought on by the movement from oral to print. He notes that Gutenberg's invention of the printing press led to decentralized power and increased liberty and equality as well as the creation of modern democracy. With the same cogency, Shapiro presents thought provoking analysis of today's cultural phenomena and fixtures including dinner rituals, sandboxes, finger-painting, the new school bell, the home/work split, the TV as the family hearth, the backlash against multitasking, the future of self-expression, the quest for a meaningful sense of self and an empathetic approach to others, the allure of YouTube, participation in a Global Community, entertainment consumerism, and much more.

Shapiro ends this astonishing book with a plea from his heart: to all parents, grandparents, teachers, and preachers who care for the young and try to give them what they need to navigate both the calm and the treacherous waters:

"Your kids need you to do everything you can to help them cultivate the capacity to connect. They need to see themselves as nodes in a network, resolving and interpreting data, creating meaning and value by articulating and redistributing information on- and offline. The issue is not developing a practical skill set; humans are tenacious and resourceful, and will always figure out how to operate the tools around them. But without adequate modeling and mentoring — without sufficient opportunities for social and imaginative digital play — they can't learn to open emotional pipelines or make use of compassionate conduits." 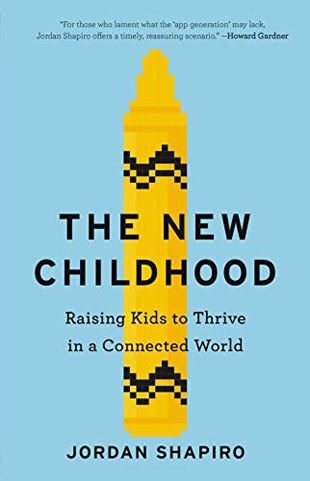