The Great Democracy How to Fix Our Politics, Unrig the Economy, and Unite America

By Ganesh Sitaraman
An idea-packed vision for what could follow the flaws of neoliberalism in the United States politics.

"The central question of our time is what comes next," writes Ganesh Sitaraman, who is Chancellor Faculty Fellow, professor of law, and director of the Program in Law and Government at Vanderbilt Law school. He is concerned about a crisis brought about by neoliberalism, the dominant ideology in the United States since the 1970s, with its tenets of deregulation, privatization, liberalization, and austerity. By emphasizing individuals over communities, it has resulted in a breakdown of values and solidarity. The country is now more divided by race, class, and culture. It has claimed that the economy is doing well, but it favors the rich over the poor.

What will happen next? Sitaraman sees four possible responses to these developments: (1) a reformed neoliberalism, (2) nationalist populism, (3) authoritarianism, and (4) a new era of democracy. Even those who are shocked and dismayed by neoliberalism's drawbacks know that the first three options are no solutions. What is needed is a new, great democracy.

Here are a few of the ideals of those seeking "A United Democracy." Sitaraman and others believe that soulcraft is required in order to create a "revival of the ethic necessary for democratic citizenship and community solidarity." This in turn will reinvigorate the traditional soul-forming institutions of family, work, education, faith, and civil society.

Also affirmed here are such concrete ideas as democratic policing; a national Patriot Corps designed as a way of melding service and schooling in order to develop a democratic ethos within individuals (see excerpt); and the establishment of a "Welcoming America Program -- to help those who have already arrived to become more connected to our national community."

In one very informative and sweeping chapter, Sitaraman reveals how economic inequality, social problems, and community are all linked together along with policies such as trade, tax, public investment, and even regulation.

The author closes with a cogent look at American democracy not as the will of the people but subject to the power and influence of the rich. The wealthy seem to control voting rules, money in campaigns, lobbying, the revolving door in government, gerrymandering, and other political strategies which lead to the stifling of the desires of ordinary people.

In a chapter on defending America in an age of technology, Sitaraman discusses national security, cybersecurity, hacking, social media disinformation, and election vulnerabilities.

Political change does not come easy. The author sees an opening toward a Great Democracy, but it will take (1) a willingness to play hardball, (2) finding leaders with courage, (3) organizing and mobilizing the grassroots, and (4) sequence policy to build power.

For almost 15 years, Sitaraman has been variously a student, coauthor, friend, and advisor to Elizabeth Warren. It will be interesting to see how she fares in her run for the Democratic nomination for the Presidency and whether or not she uses any of the author's ideas and ideals for a Great Democracy. 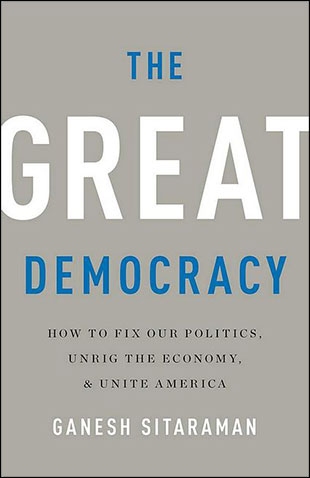