By Michael Battle
A full look at the teachings, witness, and retirement of one of the most important Christian leaders of the 20th century.

The author of this biography, Michael Battle, was ordained a priest in the Anglican Communion in 1993 in Cape Town by Archbishop Desmond Tutu. He also lived with Tutu and his family for two years in the early 1990s, during the time when Nelson Mandela was first elected president of South Africa. Michael Battle has spent many years writing this work of love, a lasting study of his mentor.

Battle is also the author of several other books, including Ubuntu: I in You and You in Me and Practicing Reconciliation in a Violent World. He is good at explaining his motivations for writing, and his explanations show how this spiritual biography is intended to be relevant beyond interest in the subject’s life and experiences. Battle offers readers:

“First, [you]…will be able to recognize a great discrepancy in Western culture — namely, how spirituality is more intelligible through communal experience than individual experience. Second, I help the reader participate in the difficult work of thinking through how to make spirituality relevant again to political structures.”

Essentially, Desmond Tutu picks up where biographer, and good friend of Michael Battle, John Allen’s Rabble-Rouser for Peace: The Authorized Biography of Desmond Tutu (a Spirituality & Practice award winner in 2006) left off. Battle’s book focuses most of all on spiritual themes in Tutu’s life with the benefit of Tutu’s retirement from public life, which took place October 2010. Battle also was given access to a wide range of personal documents by Tutu and his family.

Spiritual themes addressed include discussion of what is mystical about suffering, the communal importance of salvation, and joy and laughter as essential to a life with God — often witnessed in Tutu’s role as both confessor (one who hears the confessions of others) and confessee (the one making a confession).

In the excerpt accompanying this review, the author offers a contrast between Tutu’s Christian spirituality approach to racial conflict and the Black liberation theology approach of the late James Cone. This useful contrast helps us understand the different approaches of these two Black theologians and teachers. It also offers us a sense of the language and tone of Desmond Tutu, a book we highly recommend.

A brief word about the book's price: The print editions may be too expensive for some budgets. However, there is a great deal packed in here. The stated page count is 390, and the page design features slightly smaller type than what is usual. In other words, this biography could easily have been 450 pages. A foreword by His Holiness the Dalai Lama, an afterword by Archbishop Desmond Tutu, and several photographs add even more value. 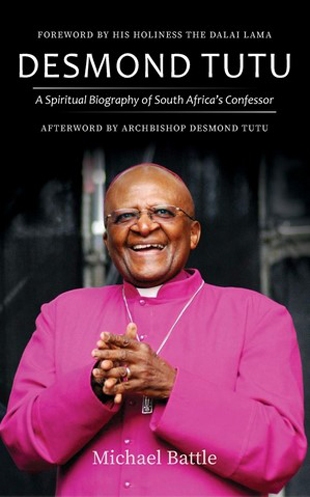 Ubuntu: I in You and You in Me

Practicing Reconciliation in a Violent World