The Book of Hope A Survival Guide for Trying Times

By Jane Goodall, Douglas Adams, with Gail Hudson
A transfusion of hope and reason to fight for our future.

Jane Goodall’s new book is being talked about everywhere right now, as it should be. Born in 1934, she is one of our wisest elders. This book is the second to be published in a series titled “Global Icons,” the first of which was The Book of Joy, with His Holiness the Dalai Lama and Archbishop Desmond Tutu. Jane Goodall keeps this company.

Both The Book of Joy and The Book of Hope are co-written by Douglas Adams, who interviews his subjects to tell their stories and relay their words of wisdom. He does this seamlessly, interweaving his own remarks and discoveries with those of his elders. For example, early on in this book, we read:

“When Jane and I agreed to work on a book about hope, I did some research into the relatively new field of hope studies. I was surprised to learn that hope is quite different from wishing or fantasizing. Hope leads to future success in a way that wishful thinking does not.”

Conversations between the two authors are both riveting and important. The reader feels blessed to be participating in it in some way. Adams is Goodall’s interlocutor:

“Do our genes,” I asked, “determine whether we are an optimist or a pessimist?”

“From all I’ve read,” Jane said, “there is evidence that an optimistic personality may be partly the result of genetic inheritance, but this can surely be overruled by environmental factors — just as those born without a genetic tendency toward optimism can develop a more optimistic and self-reliant outlook.”

She follows this later with, “Hope does not deny all the difficulty and all the danger that exists, but it is not stopped by them. There is a lot of darkness, but our actions create the light.”

In substantive chapters, we discover Goodall's "Four Reasons for Hope":

Hundreds of examples of this kind of hope fill the pages of this book. Some take the form of photographs with captions. One that moved me shows a large old tree and has this caption: “The tree that survived the atomic bomb that devastated Nagasaki in Japan. The great black wounds in her trunk show how she suffered. She is still alive and considered a sacred being by many in Japan.” This is one example of how terrible suffering and injustice can still lead to hope in its wake.

Other spiritual practices of hopefulness relate to healing as well. Goodall writes about a Native American friend, Chitcus, who has used the rhythms and tools of his medicine-man practice to pray for Goodall when she experiences depression and fatigue, with positive effects. Still very much a scientist, Goodall reflects that the spiritual and the scientific come easily together in this therapy: “It speaks to the power of our interconnection — how an aspect of our healing lies in the quality of our relationships and the ways we come together to support each other.”

The Book of Hope takes on national and global perspectives, too. For example, Goodall remembers how inspired she felt as a young girl by Winston Churchill as prime minister of England during World War II. She highlights his optimism; his truth-telling, including frank presentations of the bad news and enormous challenges facing the nation; and his humor. These elements illustrate the kind of determination and inspiration necessary for overcoming terrible and human-made circumstances, just as we now face climate change and its potential to destroy us.

For those who would say there is no hope left for us, Goodall says: “I suppose examples of the indomitable human spirit rallying us to ‘fight the unbeatable foe’ and ‘right the unrightable wrong’ have been with us throughout history.”

Then she and Adams address how to nurture an indomitable spirit in our children and grandchildren, since they, more than we, will be living into the future. Here and elsewhere in the book, she doesn’t disappoint as she offers examples from the lives of her beloved gorillas and chimpanzees.

We highly recommend this book. Be sure to read the excerpt accompanying this review as well, where Jane Goodall reflects on the afterlife.

An Array of Quotations from Jane Goodall

"Let me say that without hope, all is lost. It is a crucial survival trait that has sustained our species from the time of our Stone Age ancestors."

"Hope is contagious. Your actions will inspire others."

"Hope is what enables us to keep going in the face of adversity. It is what we desire to happen, but we must be prepared to work hard to make it so."

"We certainly hope that it is not too late to turn things around-but we know that this change will not happen unless we take action."

"It's really important for us to confront our grief and get over our feelings of helplessness and hopelessness — our very survival depends on it." 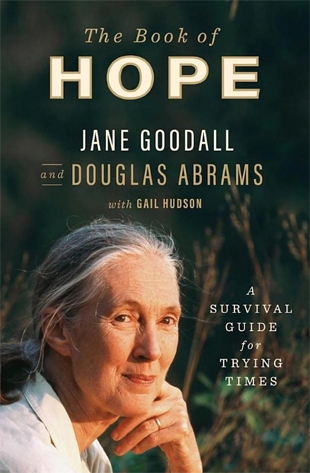 Book: The Ten Trusts by Jane Goodall and Marc Beckhoff