Bhagavad Gita The Song of God

By Swami Mukundananda (commentary)
A core scripture of Hinduism with an abundance of helpful commentary emphasizing its practicality.

The Bhagavad Gita has been translated and commented upon by hundreds, perhaps thousands, of religious thinkers, yogis, and poets in the modern era, including Mahatma Gandhi, Swami Nikhilananda, Stephen Mitchell. and Eknath Easwaran. The text began as a poem written in Sanskrit sometime between the fifth and second centuries BCE, part of a much longer epic called The Mahabharata. The author is named Vyasa, which was probably not a real person.

The story told in the Bhagavad Gita is that of the prince Arjuna (in this translation, called simply Arjun), who is about to go to war, and his charioteer, Krishna, who is the personality of the Godhead. These two have a series of dialogues over 18 chapters on topics such as love of God, yoga and discipline, death and rebirth, and selflessness and courage.

This edition of the text is typical of many others in that it includes the complete original Sanskrit, followed by transliteration of the Sanskrit, then translation into English, followed by definitions of key and unusual words and concepts, and the Swami’s commentary. There is much here; this book is 800 pages long.

The purpose of both the original text, and this commentary, is practical. As Swami Mukundananda explains in a thorough and helpful introduction: “Inexperienced spiritual practitioners often separate spirituality from temporal life; some look on beatitude as something to be attained in the hereafter. But the Bhagavad Gita makes no such distinction and aims at the consecration of every aspect of human life in this world itself.”

The Swami’s commentary is sometimes detailed, but that is because nearly every important theological and philosophical idea of Indian religion has a place in contemplating the Bhagavad Gita. Many of these passages will be a pleasure to ponder for people who feel a devotion to a personal God and those who are interested in philosophical questions about God’s existence and meaning. For example, one commentary on chapter 9 includes this:

“Often people say that they are only willing to believe in what they can directly perceive, and since there is no immediate perception of God, they do not believe in Him. However, the fact is that we believe in so many things in the world too, without direct perception of them. A judge delivers judgement upon a case concerning an event that took place many years in the past. If the judge adopted the philosophy of believing only what he or she had directly experienced, then the entire legal system would fail.”

A commentary on chapter 18 includes these words about discipline and duty, which are frequent themes in the Bhagavad Gita:

Those phrases — tamo guna, rajo guna, and sattva guna — are defined in a helpful glossary at the back of the book.

Author Swami Mukundananda was born in India in 1962, and has founded ashrams and temples in India, the United States (Allen, Texas), and elsewhere around the world. He is accustomed to explaining Vedic wisdom, yoga, and holistic health to Western audiences, including at U.S. corporations and universities such as Google and Stanford. It isn’t uncommon to find quotations from people such as Leonardo da Vinci and Albert Einstein in his commentaries. 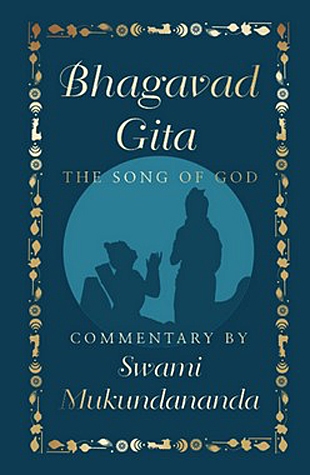