The Powers That Be Theology for a New Millennium

By Walter Wink
A trenchant theological work about evil, politics, and redemption in our world.

This trenchant theological work is a digest of the third volume of Walter Wink's trilogy on the Powers (Engaging the Powers: Discernment and Resistance in a World of Domination, 1992), with elements from the previous two (Naming the Powers: The Language of Power in the New Testament, 1984, and Unmasking the Powers: The Invisible Forces that Determine Human Existence, 1986).

The author, who is Professor of Biblical Interpretation at Auburn Theological Seminary in New York City, presents an ethically challenging reframing of angels, demons, principalities, and powers. He writes: "Every business corporation, school, denomination, bureaucracy, sports team — indeed, social reality in all its forms — is a combination of both visible and invisible, outer and inner, physical and spiritual." These systems, institutions, and structures can do good and evil at the same time: "They form a complex web that we can neither ignore nor escape."

One of the challenges for Christian churches in our time is to discern the spirits of institutions and structures. If they are organized around idolatrous values and what Wink calls "the Domination System," they must be recalled to their divine vocation — the well-being of all individuals. With great clarity and clout, the author attacks the myth of redemptive violence and proclaims Jesus's path of practical nonviolence as its antidote ("It is the way God has chosen to overthrow evil in the world.")

Wink ends with a clarion call to seek God in our enemies, to practice justice in prayer, and to work every day for the "freeing of the Powers." Reading this watershed book will open your eyes afresh to the significance of spirituality, evil, politics, and redemption in our world. 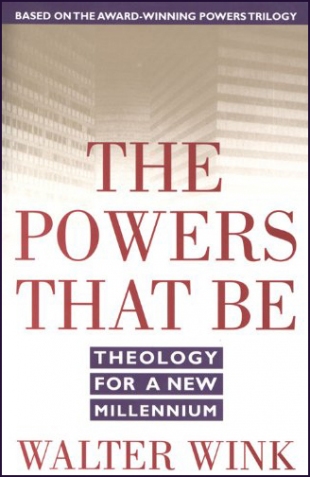