The Great Turning From Empire to Earth Community

By David C. Korten
Outlines the lineaments of a new global order based on Earth Community rather than Empire.

Dr. David C. Korten is co-founder and board chair of the Positive Futures Network, which publishes Yes! A Journal of Positive Futures; he is also the author of many books including When Corporations Rule the World. He is convinced that we stand at a pivotal point in human history after 5,000 years of what he calls Empire. The term describes the organization of society in terms of domination and the violent chauvinisms of race, gender, religion, nationality, language, and class. This hierarchal power arrangement has resulted in the comfort and prosperity of the elites and the misery and poverty of the many. The path of Empire has led us to the present situation of climate change, an unbalanced U.S. economy based on debts, war in Iraq, and social collapse. Korten lays out the high price societies have had to pay to support Empire in the past.

Korten sees new possibilities in Earth Community, which is based on partnership and cooperation. The author reveals how insights from quantum physics, anthropology, and religious mysticism support these goals. The great turning, a phrase coined by Joanna Macy, is already underway as evidenced by the higher consciousness evident in the civil rights, women's, environmental, peace, and other social movements. People are connecting with each other around the world in projects that benefit everybody rather than only the lucky and the strong.

Korten criticizes the stories laid out by those still clinging to the forms of Empire and argues that we need new Earth Community stories to propel us into a better and brighter future. Lots of work has to be done to birth this new era. The author maps out the routes to take with material on leading from below, building a political majority, and liberating creative potential. The transition from a corporate-led global economy to a planetary system of community-led local living economies will not be easy. But Korten believes that the momentum for a higher consciousness is in the favor of those working for a transformation of self, society, and planet. 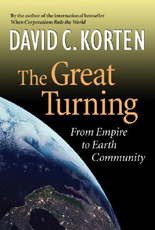