The Hidden Power of the Gospels Four Questions, Four Paths, One Journey

By Alexander J. Shaia, Michelle Gaugy
Fresh, creative, and profound interpretations and insights into the four Gospels and spiritual practices to go along with them.

Alexander Shaia is an educator, psychologist, spiritual director, liturgist, writer, and public speaker. He is the founder and director of the Blue Door Retreat in Santa Fe, New Mexico. Shaia travels internationally, lecturing and conducting workshops on the four-gospel journey of quadratos, psychotherapy, rites of passage, and Christian meditation and spirituality. In the preface to this book, he writes:

"I invite you to join in a fresh, inspiring, and pragmatic exploration of the traditional Christian gospels. I believe this new perspective on these ancient, beautiful, and frequently contentious words has long been awaited. It is my belief that this reawakened journey holds the key to unlock what has too long been closed, fearful, and rigid within ourselves and our faith."

Shaia correctly points out that the traditional interpretations of the gospel messages have long been exhausted with preachers in all Christian denominations giving the same tired and all-too-familiar responses to Jesus' life, death, and resurrection. The boring predictability of sermons on the gospels has not only kept congregations asleep but has driven seekers out of the church to other religions in search of spiritual practices to try, mystical insights to glean, and a wholeness that has been lacking in their lives.

Shaia begins by describing his personal quest which led him to the discovery through his therapy practice that in describing their journey, people invariably came up with a fourfold and sequential path. Looking further he found evidence of the four pattern in mythology, community formation, and religion. One night he had an epiphany and picked up the gospels and began to see them differently:

"Four early communities wrestled with four distinct sets of challenges when faced with four distinct sets of historical circumstances that prompted four deep questions requiring answers. There are four universal paths to spiritual maturity. There are four necessary levels to reach psychological maturity. Early Christians commonly placed the four gospels into a specific sequence and read them that way in most communities until the seventh century. . . . The four gospels in ancient sequence disclose the full internal/eternal journey, the great and immutable design, the heart of God that moves all creation."

The second chapter deals with the historical, sociological, and scientific principles which form the foundations of this quest for meaning in the gospels. Shaia moves on to his commentary on Matthew, Mark, John, and Luke; each chapter opens with a poem to set the mystical mood and then examines the gospel as a path with its own special function on the transformational journey. He spells out the historical background of the texts and examines the themes from opening to close. Excerpts from ancient and contemporary sources are provided as well as a discussion of the differences between the gospels. Best of all, Shaia provides a prayer, a summary, and "exercises" (recommendations for study and practice from this gospel path). Following the treatment of Luke's gospel, you will find extensive recommended practices for individuals and groups.

Shaia shares his excitement in the discovery that each gospel has a core metaphor and a universal spiritual question that it explores:

• The Gospel of Matthew: Climbing the Great Mountain
How do we face change? The First Path

• The Gospel of Mark: Crossing the Stormy Sea
How do we move through suffering? The Second Path

• The Gospel of John: Resting in the Glorious Garden
How do we recover joy? The Third Path

• The Gospel of Luke: Walking the Road of Riches
How do we mature in service? The Fourth Path

These questions form what Shaia calls the quadratos journey, a recurring fourfold cycle of psychological and spiritual transformation that speaks to the needs of both Christian believers and adherents to other religions. Here is a map that relates to both head and heart, that takes seriously the mysteries of humanity and the universe, and that honors both the power and relevance of meditation and activism in service of others. The quadratos journey moves Christianity away from it current obsession with dogma and historicity to an emphasis on practice.

Matthew's gospel is addressed to the Messianic Jews of Antioch two to five years after the destruction of the Great Temple of Jerusalem and the murder of its priests. They were a community torn apart by anxiety and fear. Mathew points out to them that Jesus has come with a new temple that is within. With great enthusiasm, clarity, and creativity, Shaia spins off fresh insights into the meaning of the genealogy list, the nativity, the flight to Egypt, Jesus' baptism, the temptations, the sermon on the Mount, meeting betrayal with friendship, crucifixion and death, and the resurrection of the Messiah. Out of all these elements, Shaia delineates a map of change based on courage and trust, turning to inspiration from others, watching out for self-delusions, practicing compassion for ourselves and for others, staying awake, taking responsibility for what we do on the journey, and holding fast to Jesus' promise that he will be with us through all the different and often difficult stages of our spiritual unfolding. Equally fresh insights can be learned in Shaia's coverage of the gospels of Mark, John, and Luke.

In an attempt to further emphasize the practical dimension of the quadratos journey, the author shares eight spiritual practices that characterize spiritual maturity. They are:

• Speak truth and unity.
• Open and engage the truths of beauty.
• Find the quiet center.
• Absorb the deeper rhythms.
• Expand into risk.
• Learn to let go.
• Build the new Jeru-Shalom.
• Make the great leap of trust.

The Hidden Power of the Gospels by Alexander Shaia with Michelle Gaugy is a formidable work which can bring new life to the teaching and preaching ministries of Christian churches and added zest to the burgeoning interspirituality movement. 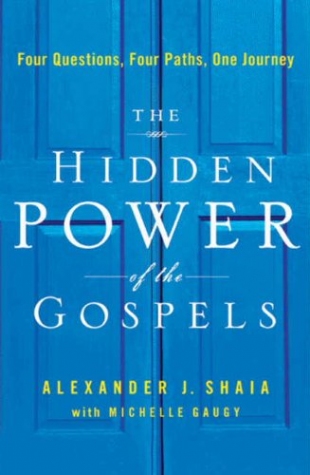