A Solemn Pleasure To Imagine, Witness, and Write

By Melissa Pritchard
Essays that impress with their spiritual breadth and depth.

A Solemn Pleasure is the inaugural title in Bellevue Literary Press's "The Art of the Essay" series which features compelling, creative nonfiction from accomplished writers of fiction. Melissa Pritchard has written eight works of fiction including the novel Palmerino and the story collection The Odditorium.. She has worked as a journalist in Afghanistan, India, and Ethiopia.

The author has come up with the perfect title for the 15 essays in this paperback. There is a deeply spiritual mission to her "imagine, witness, and write" process that covers a wide range of material. Art, for her, is "a form of active prayer." Some of our favorite essays are a tribute to Walt Whitman as a saint, a meditation on the bliss of the impersonal, a Sufi teaching story, a paean of praise to a dachshund, a look at cremation, a portrait of Georgia O'Keefe as "an artist of uncommon and cultivated paradox," and a touching account of her adopted son William, a former Sudanese child slave.

As we read through these ethically rich essays, we thought of E. B. White's wise words:

"The essayist arises in the morning and, if he has work to do, selects his garb from an unusually extensive wardrobe: He can pull on any sort of shirt, be any sort of person, according to his mood or subject matter — philosopher, scold, jester, raconteur, confident pundit, devil's advocate, enthusiast."

Essays are alive and well! And Melissa Pritchard can prove it: just pay attention to the surge of her mind and the spiritual energy she demonstrates. By the way, she has plenty of shirts! 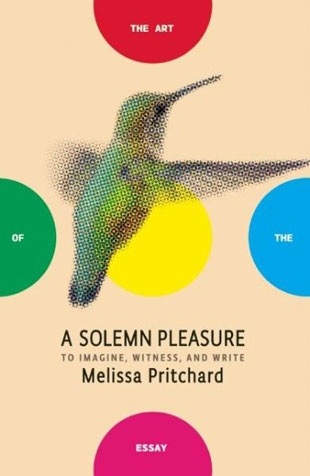