The great Persian poet Jelaluddin Rumi (1207-1273) is as well known in the East as Shakespeare is in the West. His output is impressive — he composed 3500 odes, 2000 quatrains, and an epic six-volume poem titled Mathnawi. And although his poetry grows out of the rich and robust soil of Sufism, the mystical expression of Islam, it speaks alike to the hearts and minds of Muslims, Jews, Christians, Hindus, Buddhists, and people of other spiritual paths. It's not surprising, then, that Rumi has become the bestselling poet in America.

Rumi's spiritual largess is awesome — everything is taken into his embrace. The poetry is sensual, celebratory, pensive, and amazingly down-to-earth. Kabir Helminski, shaikh of the Mevlevi Sufi Order founded by Rumi, identifies a central theme in his teaching: "He awakens us to the fact that not only is God the Beloved of the human being . . . but the human being is the beloved of God."

This 40-part e-course offer quotations from Rumi's poetry and practices suggested by his teachings. It is our hope that our choices from the great bounty of Rumi's words will help us all cultivate heart, passion, joy, personal transformation, and renewed devotion. May each email be a reminder that, as Rumi says, "There are hundreds of ways to kneel and kiss the ground." 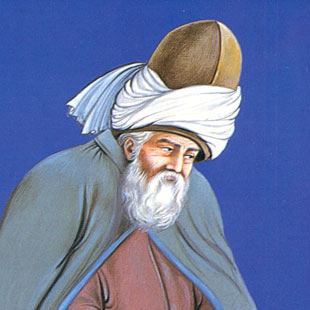