Born in 1950, Thubten Chodron grew up near Los Angeles. She graduated with a B.A. in History from the University of California at Los Angeles in 1971. After travelling through Europe, North Africa and Asia for one and a half years, she received a teaching credential and went to the University of Southern California to do post-graduate work in Education while working as a teacher in the Los Angeles City School System.

In 1975, she attended a meditation course given by Ven. Lama Yeshe and Ven. Zopa Rinpoche, and subsequently went to their monastery in Nepal to continue to study and practice Buddha's teachings. In 1977, she received the sramanerika (novice) ordination, and in 1986, went to Taiwan to take the bhikshuni (full) ordination.

She studied and practiced Buddhism of the Tibetan tradition for many years in India and Nepal, and directed the spiritual program at Lama Tzong Khapa Institute in Italy for about two years. She studied three years at Dorje Pamo Monastery in France and was resident teacher at Amitabha Buddhist Center in Singapore. Ven Chodron was a co-organizer of Life as a Western Buddhist Nun, and took part in the conferences of Western Buddhist teachers with H.H. the Dalai Lama in 1993 and 1994. She was present during the Jewish delegation's visit to Dharamsala, India, in 1990, which was the basis for the book and documentary, The Jew in the Lotus, and she is keen on inter-religious dialogue. She has also attended several of the Mind-Life Conferences in which scientists and H.H. the Dalai Lama discuss similarities and differences between science and Buddhism.

Ven. Chodron lived and taught in Seattle with Dharma Friendship Foundation (DFF) for 9 years. Currently, she is founding Sravasti Abbey, a monastery in the USA. She travels worldwide to give talks about Buddhism and to teach meditation. Her books include Open Heart, Clear Mind (Snow Lion, Ithaca NY), Buddhism for Beginners (Snow Lion, NY), Working with Anger (Snow Lion), Taming the Monkey Mind (Heian Publications), and Blossoms of the Dharma: Living as a Buddhist Nun (North Atlantic Books, Berkeley CA). 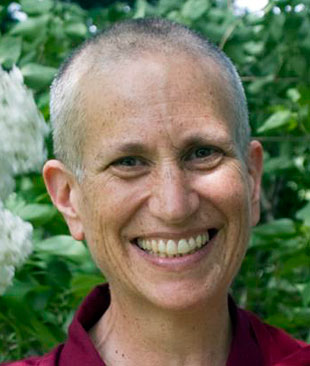