Neil Douglas-Klotz grew up in a multicultural family. His grandparents (on both sides) were refugees from Europe with German, Jewish, Russian, and Polish blood in their veins. They followed their track to the ethnic neighbourhoods of Chicago, where his parents met and married.

Klotz was raised by Christian parents who were both devout and freethinking. They brought into his early life the impulse to worship and praise, as well as to question everything that constricted and opposed the injunction "love your neighbour as yourself." His father was a chiropractor, his mother a student of the health education of Edgar Cayce; they raised Klotz with a respect for the body and the wonders of nature found therein, as well as a disdain for the superficial innovations of humanity that polluted both body and nature.

Hearing from childhood German, Yiddish and Polish in his home, raised on the stories and miracles of Jesus, taught the practical truth of Rachel Carson's Silent Spring, Klotz formed an interest in language, spirituality, the body, and ecological justice early in life. In many ways, he have been pursuing these interests ever since.

After graduation from college in 1973, Klotz pursued a career as a journalist in the fields of social justice, environmentalism, and consumer protection for several years before turning to the following questions: Why do people change? What causes me to change? Is there a more powerful level of motivating change than that of ideas? In pursuing these questions, Klotz returned to interests he had developed in college that centered on: the body and changes of attitude and behaviour, mystical and "expanded" states of consciousness, and the early pre-religious roots of Judaism, Christianity and Islam.

Neil Douglas-Klotz pursued some of this study academically through the University of California, Berkeley. But most of it found him seeking out teachers from the native traditions of the Middle East, Pakistan and India who introduced him to the other modes and methods of learning as well as the body-oriented spiritual practices that accompanied this study. Beginning in 1976, Klotz was very privileged to study with the early students of the American Hebrew/Sufi mystic Samuel L. Lewis, who introduced him to the body prayer meditations called the Dances of Universal Peace. One phase of this intense period of study led Klotz on a three-month pilgrimage in 1979 to sacred sites and teachers in Turkey, Pakistan, and India.

In 1982, Neil Douglas-Klotz founded the International Network for the Dances of Universal Peace (now based in Seattle, WA), a multicultural resource center for those who chose this form of peacemaking through the arts as their forum for both peace "demonstration" as well as spiritual practice. Over the past 15 years, Klotz has been actively involved in leading educational exchanges and citizen diplomacy trips with the Dances to Eastern Europe, the former Soviet Union and to the Middle East.

From 1986 until 1996, Klotz served as a faculty member of the Institute in Culture and Creation Spirituality. He has been a member of the Core Faculty since 1990. During its "golden age," the ICCS was a gathering place for scientists, artists, educators and learners from many different cultural and racial backgrounds. Many of the students were non-US citizens and Klotz enjoyed the opportunity to teach and learn across the differences and within a rich field of diversity. This diversity, at its best, provided a sort of "quantum field" of uncertainty in which real inquiry and learning occurred for us all.

In September 1993, Klotz co-led a group of students from Europe, Australia, the U.S. and Canada on a citizen diplomacy/educational trip to Jordan, Israel and Syria. Serendipitously, this occurred exactly during the signing of the Israel-PLO accords. The group was greeted warmly and were able to share discussions and artistic and cultural exchanges with many different people from all the varied sides of the confrontation. Klotz has continued work in this area, both individually, and collaboratively through the International Association of Sufism.

During his sabbatical to finish his doctorate, Klotz and his partner moved to Europe. It both allowed him to be nearer to his Middle Eastern connections and seemed more welcoming to the type of multicultural work they were both doing.

Since March 1999 he has lived in Edinburgh, Scotland, another multicultural arts and music center where he started the Edinburgh Institute for Advanced Learning (www.eial.org). His fluency in German and some other European languages also enables him to continue educational exchanges and lectures throughout Europe. In 2004, he co-founded, with Mr. Neill Walker, the Edinbrugh International Festival of Middle Eastern Spirituality and Peace (www.mesp.org.uk), which annually in March draws thousands of visitors to events across the city. It is supported by the Scottish Government and the City of Edinburgh. Since 2006, he has been married to Natalia Lapteva, a Russian therapist and coach. 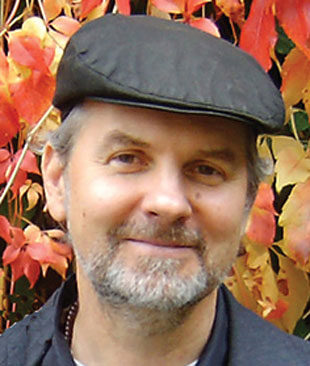