With more than 45 published books and widespread acclaim for their creatively charged mysticism, shamanism, and heart-opening healing sessions, Hillary and Bradford Keeney have touched the lives of people throughout the world. As exemplar spiritual guides they help develop people's inborn natural gifts and unique life missions.

Hillary Keeney, Ph.D.is an internationally renowned teacher of ecstatic transformation and the associate editor of the journal, Dance, Movement, and Spiritualities. She has been a Distinguished Visiting Professor at Benemérita Universidad Autónoma de Puebla (BUAP) in Mexico and Senior Research Fellow at the University of Louisiana. Paul Trachtman, former editor of Smithsonian Magazine describes Hillary as “an authentic traditional healer with impeccable scholarship.” Her scholarship has made contributions to the study of interdisciplinary pedagogy, social cybernetics, creative therapeutic practice and training, ethnographic study of healing traditions, qualitative research of communication, and dance. She provides postgraduate training to therapists, coaches, and other healing professionals at conferences and workshops throughout the world.

Bradford Keeney, Ph.D. is critically acclaimed for his creative innovations in the art of conducting experiential transformation. He served as a professor, director, and founder of doctoral programs in numerous universities. An accomplished psychotherapist, Brad has worked at some of the most highly respected psychotherapy institutes, including the Ackerman Institute, the Karl Menninger Center, and the Philadelphia Child Guidance Clinic at the University of Pennsylvania. He was also accepted as a healer by the Kalahari Bushmen (San) of southern Africa and the healers of Bali, Mexico, Brazil, St. Vincent, Japan, and other traditions. Megan Biesele, a former member of the Harvard Kalahari Research Group, writes: “There is no question in the minds of the Bushman healers that Keeney’s strength and purposes are coterminous with theirs. They affirmed his power as a healer.”

In 2010, Hillary and Brad made it their mission to bring sacred ecstasy back to contemporary times. They identified a practical recipe for bringing forth sacred ecstasy: a special blend of syncopated rhythm, embellished tone, automatic movement, and sacred emotion. At its peak intensity an extraordinarily felt vibration called a “fire in the bones” comes to life inside the body. They called their co-creation Sacred Ecstatics: a radically practical and creative approach to spiritual transformation that brings together the improvisational performance arts and the know-how of ecstatic healing traditions. 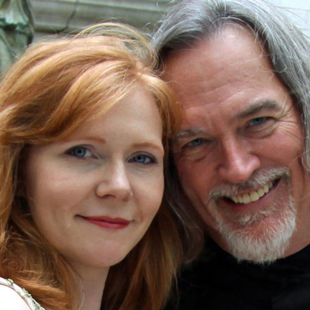