Directed by Gus Van Sant
A touching tale about a troubled genius struggling to find his identity.

We all long for a soul friend, someone who will cherish the secret signature of our individuality. The emotionally troubled protagonist of Good Will Hunting is blessed with three soul friends who enable him to find his place in the world.

Matt Damon gives a tour de force performance as Will, a 20-year-old townie who works as a janitor at M.I.T in Boston. After another scrape with the law, he is taken under the wings of Professor Lambeau (Stellan Skarsgard of Breaking the Waves), a professor of mathematics who has discovered that Will is a math wiz with a photographic memory.

As part of his rehabilitation, this walled-off orphan must see Sean McGuire (Robin Williams in an Academy Award-winning performance), a therapist, every week. The relationship between these two underachievers is mutually beneficial as they help heal each other. Luckily for Will at this critical juncture in his life, he meets and falls in love with Skylar (Minnie Driver), a Harvard pre-med student who is sexy, smart, and sensitive. Along with Chuckie (Ben Affleck), Will's best friend, she wants him to become all he was meant to be.

Good Will Hunting was written by its actors, Matt Damon and Ben Affleck, and they got an Academy Award for the effort. Gus Van Sant's no-nonsense direction keeps this multilayered psychological drama on course as it probes the complicated themes of love, work, ambition, self-esteem, and failure.

"You are destined to fly but that cocoon has to go," Nelle Morton once wrote about that important moment in our lives when we must risk change. In this salutary film, Will sheds his cocoon with the help of Sean, Skylar, and Chuckie. They are true friends of his soul. 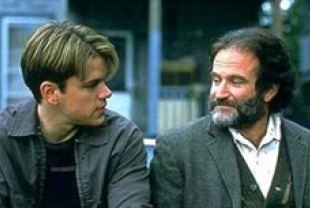