Directed by Ron Howard
A fascinating and riveting film about a television personality and a former President who share a dependence on others for respect.

In 1977, a very ambitious David Frost (Michael Sheen), the host of a talk show in Australia, comes up with the idea of interviewing the fallen and disgraced U.S. President Richard Nixon (Frank Langella). He faces an real challenge getting the project funded and finding a broadcaster when the major American TV networks and advertisers are cold to the idea, using the words "checkbook journalism" to describe it. Nixon's agent, Swifty Lazar (Toby Jones), has negotiated a deal for $600,000 for a multi-hour four-part interview. The former President thinks he will be able to reshape the negative view the American public has of him following the Watergate scandal and his resignation. At his seaside villa in San Clemente, California, Nixon is supported by his wife Pat (Patty McCormack) and his aide, former Marine Col. Jack Brennan (Kevin Bacon). It is agreed that only 25 % of the interview will be about Watergate.

Frost, realizing that he is going to need plenty of help as he prepares for this career making or breaking event, puts together his team: British producer John Birt (Matthew Macfadyen), journalist Bob Zelnick (Oliver Platt), and writer and researcher James Reston, Jr. (Sam Rockwell), who wants to bring Nixon down by having him confess his crimes against America. Despite the pressure to gather more financial support for the $2 million project and to syndicate the series himself, Frost finds time to romance Caroline Cushing (Rebecca Hall), a beautiful woman he meets on his flight to California for his initial meeting with Nixon.

Director Ron Howard can always be depended upon to deliver ethically charged movies with characters whose personal gifts and flaws are on display. He has done a top-notch job in bringing Peter Morgan's riveting stage drama to the screen. Morgan, the screenplay writer for the biopic The Queen, keeps us on the edge of our seats as the interviews unfold and Frost and Nixon battle each other for dominance.

The interviews take place at the home of a Republican Party supporter of the former President, and media attention to the event almost turns it into a circus. In a late night call to the television personality, the former President points out how they are both trying to resurrect themselves after being put down by others who see themselves as morally superior. "The limelight can only shine on one of us. For the other, it will be the wilderness." Frost realizes that he is David against Goliath, especially when in the first three interviews Nixon has his way with him, controlling the conversation and scoring points in his own favor. Howard sheds further light on what's happening by including brief interviews with their handlers. It is especially interesting to see how Nixon plays mind games with Frost in private exchanges about his love of Italian shoes and sex with Cushing.

Frank Langella gives an Academy Award-caliber performance as Richard Nixon. In contrast to the surface depiction of President George W. Bush in Oliver Stone's W, he digs deep into this complex man's character and brings to the fore his love of power, his vanity, his paranoia, his angry rants against enemies, his self-loathing, his emotional volatility, and his yearning to be back in Washington in the middle of some political skirmish. It is easy to see why Langella won a Tony for his performance in the Broadway play. By the end of the film, he has our sympathy as he heads off for the wilderness.

Michael Sheen, who was excellent as Prime Minister Tony Blair in The Queen, puts in a stellar depiction of the gregarious Frost whose risk pays off big time. The screenplay delivers some sharp insights into the neediness and vulnerability of those who depend for their own self-esteem on the respect and reactions of others. It is a hard road to follow, and both Frost and Nixon suffer the pain that comes from letting others determine their sense of worth.

Special DVD features include deleted scenes; "The Making of Frost/Nixon": Take an in-depth look at all aspects of the production and discover the lengths it took to recreate this historic event for the big season; The Real Interview: Footage from the actual interview and how it compares to the way it was reenacted for the film; The Nixon Library: Discover the materials that have been preserved for public viewing in the Richard Nixon Library, ranging from the "Nixon Tapes" to footage of Nixon visiting China; and a feature commentary with director Ron Howard. 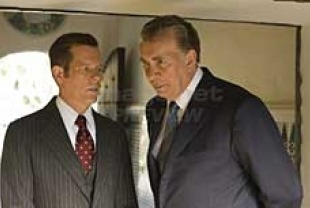 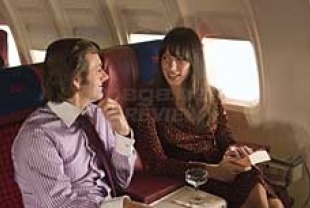 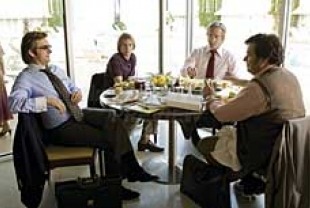 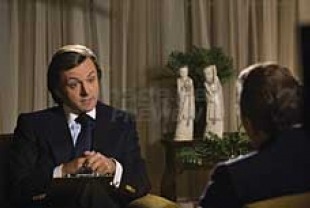 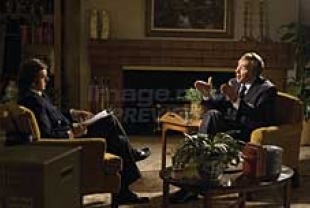