Directed by Michael Haneke
A dark and foreboding film about the seeds of hatred in the home that can lead to the rise of fascism.

Austrian film director Michael Haneke caught the interest of moviegoers around the world with The Piano Teacher and Hidden / Cache. In these two enigmatic and well-constructed dramas, he explored with nuance and sophistication the mysteries of human behavior. His latest film also explores that turf. The setting for The White Ribbon is a small rural village in pre-World War I Germany. The narrator, an old man (Ernst Jacobi), describes a series of bizarre and vile incidents that tear this Protestant community apart. Haneke presents a dark and foreboding portrait of the seeds of violence that would eventually bloom into world war and the rise of fascism.

Most of the poor farmers and laborers in Eichwald work for the rich and powerful Baron (Ulrich Tukur) who is marred to a cultured woman (Ursina Lardi) who cannot bear the brutal world of the uneducated people in the village. They have a son who is treated shabbily by the poor children. In the opening scene of the drama, the local doctor (Rainer Block) is badly hurt when his horse trips over a wire that has been deliberately set by someone to harm him. Shortly afterwards, a woman falls to her death through rotted boards in the Baron's barn. A lot of anger toward their employer surfaces in the village. A young man vents his ire by destroying the Baron's wife's cabbage garden. Then the Baron's son is found beaten and hanging inside the same barn. A final victim is a retarded boy who is blinded as a result of being assaulted.

The 31-year-old schoolteacher (Christian Friedel), like everyone else in the community, is shocked and appalled by these senseless crimes. What he does not see is the domestic violence of men against the women and children in their households. The worst of the male offenders is a brutally authoritarian pastor (Burghart Klaussner) who constantly humiliates his two oldest children by punishing them physically for their sins. He even has the boy's hands tied to the side of his bed at night so he won't masturbate. The doctor who dispenses care by day to the villagers cruelly shames his main helper and lover by night through a hateful verbal attack on her body, psyche, and soul. The only gentle soul is the school teacher who spirits are lifted after he meets and falls in love with 17-year-old Eva (Leonie Benesch) who works as a nanny at the Baron's house.

The White Ribbon skillfully and convincingly shows how physical and verbal violence can be conveyed to impressionable children who then try to mimic their parents. Male chauvinism and a warped view of Christianity with an emphasis on judgment, blame, and punishment also become primary catalysts for inhumane treatment of others, especially those who are seen to be outsiders or enemies. Haneke has made a powerful film that condemns the factors which lead people to hatred and violence. 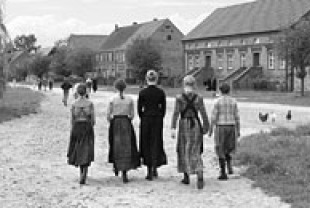 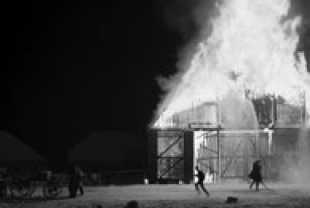 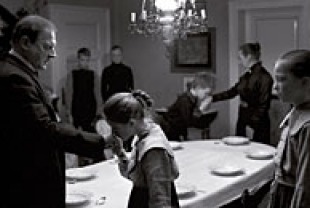 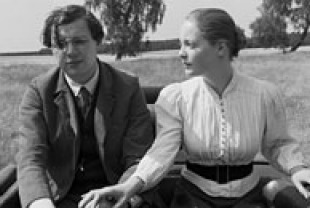