Directed by Gregg Champion
A heart-affecting drama about the 2006 shootings at an Amish schoolhouse that depicts the difficulties and complexities of the spiritual practice of forgiveness.

Gregg Champion directs this heart-affecting drama which aired on Lifetime to over four million viewers, making it the highest rated movie in the cable channel's history. It is based on a bestselling book of the same title by Donald B. Kraybill, Steven M. Nolt, and David L. Weaver-Zercher, which we chose as one of the Best Spiritual Books of 2007. The story revolves around the Amish community's reaction to the shootings at their school in Nickel Mines, Pennsylvania, in which five girls were killed and five others were seriously wounded before the gunman took his own life. The screen adaptation takes certain creative liberties, notably in creating the composite family at the center of the drama; some have been highly critical of such straying from the truth whereas others have seen the changes as necessary to help the audience understand the views and motivations of this conservative religious group and its strict practices. The Amish have a very heightened sense that the world is but a prelude to eternal life where true happiness resides in union with God.

Gideon Graber (Matt Letscher) and his wife Ida (Kimberly Williams-Paisley) are very proud of their oldest daughter Mary Beth (Madison Davenport) who has hopes of becoming a school teacher in Nickel Mines some day. She is a serious girl with a special ability to look after others, especially her younger sister Katie (Karley Scott Collins). The whole family enjoys a festive Sunday dinner with others from their small Amish community.

Charlie Roberts (John Churchill) is known in the Amish community as the man who drives the milk truck. He is married to Amy (Tammy Blanchard), and they have three children. Charles has never gotten over the sudden death of his last child, a girl who died the day she was born, and blames God. He has decided to take out his revenge on the children in the Amish community. We see him enter the school house with his rifles but we are mercifully spared viewing the tragic event. We see only the teacher running for help.

When news of the shootings hits the Amish people, their fear and anguish is palpable. Ida is shaken to the core when she learns that Mary Beth is among the dead. Equally mixed with her grief is her rage against the killer who took her life. A television reporter, Jill Green (Fay Masterson), is on the scene covering the tragedy and is astonished when she sees three Amish elders, including Gideon, stop by the Roberts house to express their condolences to his shocked wife. She had no idea that her husband was contemplating such an evil deed. But the elders tell her that they forgive Charlie and then offer their help with anything she needs. She and her father are thrown off balance by this goodness and do not know how to react. The TV reporter and her photographer are equally baffled.

Ida's anger dredges up an old resentment against the Amish elders who shunned her widowed sister when she left the community to marry an "English" outsider. When Ida learns what happened at the Roberts home, she lashes out by saying, "You can all forgive the man who murdered our children, but you cannot forgive a lonely widow for falling in love." Gideon is deeply hurt by Ida's views and especially her claim that Mary Beth was "of priceless value" and that he has made "her cheap with your easy forgiveness."

Gideon, on the other hand, sees the Amish ideal of forgiveness as essential to the faith and his understanding of God: If we forgive, God promises that peace will follow. He agrees with the leader of the community who says, "We will not allow hatred into our hearts. It not only goes against God's will, it becomes a corrosive force that further compounds the original anguish." Unable to persuade Ida to abandon her feelings of revenge, Gideon turns to Katie who is experiencing her own feelings of anger against the killer and guilt over abandoning Mary Beth by running out of the school when she had the chance. "Hate," he tells her, "is a very big and very hungry thing with lots of sharp teeth, and it will eat up your whole heart and leave no room for love."

Amish Grace is a powerful and enlightening drama which reveals the difficulty and complexity of the spiritual practice of forgiveness. We identify with Ida who struggles mightily with her strong feelings of rage and revenge. Mary Beth's murder has shattered her heart, and she can't bring herself to forgive the man who killed an innocent girl. Her confusion over the Amish view of forgiveness is echoed by Jill Green, the reporter, who asks one of the elders how there can be forgiveness without remorse on the part of the killer; she also wonders if the community is being forced to accede to the wishes of the elders, at the expense of their grief. These are common questions regarding forgiveness, given voice through these characters.

Gideon reveals yet another response. He comes to see the loss of his daughter as a test: "It is not easy to forgive. The Lord does not set us on an easy path. But faith, when everything is as you want it to be, is not true faith. It is only when our lives are falling apart that we have the chance to make our faith real." The closing scenes in Amish Grace perfectly mirror the truth of what he is saying. 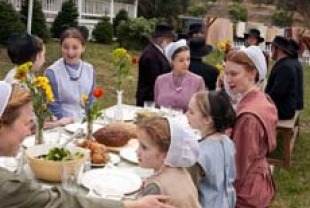 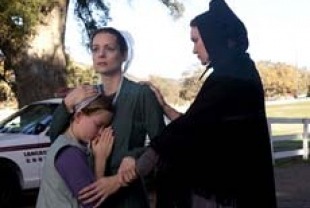 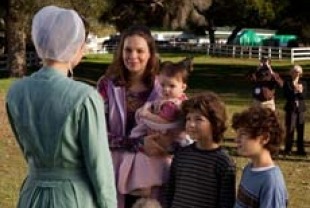 Excerpt from the book on the Amish practice of forgiveness