Directed by Nigel Cole
The remarkable, funny, and inspiring true story of women fighting for equal pay in a Ford Motor Company in 1968 England.

Dagenham England is a working-class city in 1968. Many of the men work in the Ford Motor Company's new plant, while 187 women slave away sewing car seats in a crummy cavernous room that is too hot, with a leaky roof. And we all know how much it rains in England. Albert (Bob Hoskins) is the union representative for the women and he wants to make things better for them. Connie (Geraldine James), the shop steward, also believes that change can be achieved down the pike. Albert senses they need a new voice in their next meeting with management, and he suggests that Rita O'Grady (Sally Hawkins) join them. She is married to Eddie (Daniel Mays), a mild-mannered laborer who also works at Ford and they have two children.

In their first meeting at a fancy dining place where they receive a free lunch, Rita is stunned by the way the plant's union chief (Kenneth Cranham) kowtows to the desires of Ford's Head of Industrial Relations, Peter Hopkins (Rupert Graves). This spunky and honest working woman is angered by the patronizing attitude. Speaking truth to power, she begins her campaign to receive equal pay. The union chief is stunned; Albert and Connie are inspired; and Hopkins is not a happy camper realizing that trouble looms for the auto giant.

Rita leads a one-day strike and many of her allies show up with enthusiasm — including two who become part of her inner circle: Brenda (Andrea Riseborough), a justice-seeking young woman, and Sandra (Jaime Winstone), an aspiring model. Part of their protest is fueled by Rita's contention that it is unfair to classify women as "unskilled workers" in order to keep their wages low. As the battle against management heats up and the women go on a longer strike, a section of the Ford plant where men work is forced to shut down, since it is dependent on the work done by the 187 women.

Fearing a worldwide revolt and upsetting of the status quo, Ford sends an American to find something in Rita's life or character to bring her down. When nothing can be found, the American executes a few more dirty tricks. A high point is when Rita's speech convinces a gathering of male trade union members to support the striking women. Eventually, the struggle is widely covered by the media, and Barbara Castle (Miranda Richardson), Secretary of State for Employment and Productivity under Harold Wilson's government, calls for a meeting with Rita at Westminster.

Made in Dagenham is directed by Nigel Cole (Saving Grace, Calendar Girls) with a screenplay by William Ivory based on the true story of Rita O'Grady and the working women who made history with their quest for justice from the Ford Motor Company. The drama vividly conveys the camaraderie of the women, who sense that the tide of change is on their side despite their years of subservience to men at home and at work. As he did in Saving Grace and Calendar Girls, Cole shows his talent for infusing stories with humor and playfulness.

Made in Dagenham really hits home thanks to three top-drawer performances. Sally Hawkins, who was so impressive in Mike Leigh's Happy-Go-Lucky, scores another acting triumph in this drama where she conveys the emotional nuances of Rita's courage, resilience, guilt, and perseverance. It is fascinating to watch a leader unfold before our eyes. Bob Hoskins, always a reliable character actor, is touching as the union representative who serves as a cheerleader for the women's feisty campaign for equal pay. And Miranda Richardson is an impressive presence as the Secretary of State for Employment and Productivity. In the closing scenes of the film, she is at once feisty, sensitive, funny, and powerful.

Special features on the DVD include a commentary with director Nigel Cole; the making of Made in Dagenham; outtakes; and deleted scenes. 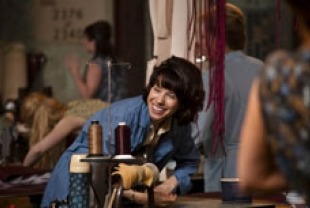 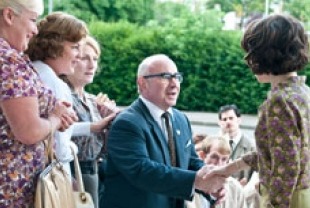 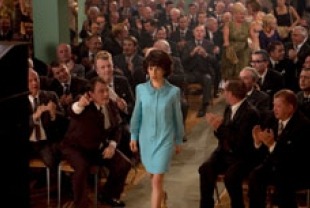