Directed by Pablo Larrain
Last of a trilogy of films about Chilean politics, told through the story of an ad man using positive images to persuade voters to reject a dictator.

No is the last of a trilogy of films about Chilean politics. It is set in 1988 when the people of Chile were given a chance to keep the presidential regime of the ruthless dictator Augusto Pinochet by voting "yes" or rejecting him by voting "no." Although dealing with a momentous political moment, Chilean director Pablo Larrain chooses to focus on the impact of images on the general public, giving him a chance to examine with wit the art of manipulation and the major role of advertising within the rough world of politics.

Larrain's Post Mortem is a chilling drama, seen through the eyes of a mortuary assistant, about the violence in Chile in 1973 when the government of Salvador Allende was overthrown. The other film in this series, Tony Manero, deals with the crushing weight of authoritarian oppression by the regime of August Pinochet and one man's obsession with John Travolta's character in the movie Saturday Night Fever.

Rene Saavedra (Gael Garcia Bernal) is a talented and creative ad executive whose politically active wife has left him for another man. They share custody of their young son. Rene meets with an old family friend, known for his Communist leanings, who wants him to put together an ad campaign complete with promotional spots to convince Chilians to vote "No."

When his boss at the agency finds out about it, he is not pleased. He is working for the "Yes' campaign, a cabal of men and women who are loyal to the presidential regime of Augusto Pinochet. And when the going gets tough, he is willing to use "dirty tricks" to advance his cause.

It is not easy sailing for Rene. He wants to fashion a positive and inspiring campaign rather than an obvious one emphasizing police brutality, the large numbers of "lost citizens," and the failure of the Pinochet regime to care for anyone except the rich and the powerful. After early presentations of his approach, Rene is criticized for trivializing the serious concerns of those in opposition to the dictator. But he stays with his concept and organizes it around the slogan: "Happiness is in the future, Chile."

Gael Garcia Bernal is excellent as the imaginative ad man who sees the reality pointed out by New York media expert Tony Schwartz, a veteran producer of television ads for politicians: "You don't package the candidate, you package the voters." This wise insight makes Bernal's Renee a creative genius far out ahead of his time. Democracies thrive on such geniuses! 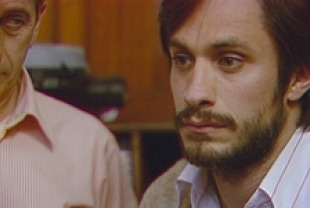