Are you tired of television programs where the conversation is trivial and lacking in imaginative velocity? On this 6-disc boxed set of DVDs from the legendary Emmy and Peabody Award-winning journalist Bill Moyers, you will be treated to thought-provoking displays of intelligent conversation.

In the three DVDs titled On Faith & Reason, he sits down with 12 noted scientists, novelists, philosophers, and religious writers and thinkers to talk about their quest for meaning and the tension between faith and reason in their lives. It opens with a bang provided by Salman Rushdie who talks about Islam and dealing with the fatwa issued against him by Islamic fundamentalists. At one point he says: "One of the awful things about long term mass censorship is that in the end people can lose a sense of what it's like to live in a free world. You know, because there's nothing automatic about it. It's a thing you have to fight for and preserve." Struggling to make it through his ordeal, Rushdie admits to finding solace and inspiration in Gothic art.

Novelist Mary Gordon, also in a confessional mood, reveals that at the age of 12 she wanted so much to be a Christian martyr that she put on shoes with thorns inside them to make her feet bleed. She goes on to discuss the role of belief in her life, her writing, and in American culture.

American writer Richard Rodriguez discusses the challenges of being Catholic and a homosexual whereas Canadian novelist Margaret Atwood and British novelist Martin Amis explain the role of fundamentalism in their writings and in the world today. Pema Chodron closes the series with an overview of her spiritual journey as a Buddhist nun and "Bodhisattva warrior." She concludes: "It isn't the things that happen to us in our lives that cause us to suffer, it's how we relate to the things that happen to us that causes us to suffer."

This set of DVDs also includes the two discs of The Wisdom of Faith with Huston Smith (276 minutes) where the author of the bestselling The World's Religions provides a fascinating and soul-stirring overview of his teachings and life story. A final disc, Amazing Grace (80 minutes), has Moyers looking at the famous religious song and exploring its meaning and durability in conversations with and performances by Johnny Cash, Judy Collins, Jessye Norman, Marion Williams and others. A final treat is Pure Pete Seeger (54 minutes), a bonus feature revolving around the renowned folk singer and activist.

Special features include three 12-page viewer's guides with articles related to each program plus biographies of Bill Moyers and program participants. 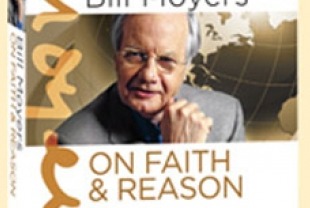