Directed by Niki Caro
An exciting sports film that also stands as an emotionally rich depiction of community, sharing, and generosity.

In the opening scene of this emotional rich and resonant sports film, Jim White (Kevin Costner), the coach of a high school football team, loses his temper in the locker room and throws a shoe at a player, cutting him on the face. He is promptly fired. This is not the first job White has lost because of his Wild West personality. Leaving behind the suburban life in Boise, Idaho, he and his long-suffering wife Cheryl (Maria Bello), his teenage daughter Julie (Morgan Saylor), and preteen Jamie (Elsie Fisher) drive to McFarland, a poverty-stricken town in California's central valley where most of the population is Mexican-American. 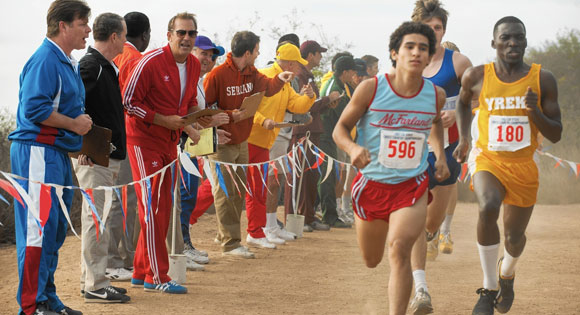 Jim is still upset with himself and hearing a rooster crow to awaken them early in the morning, he is not sure whether he will be able to bear all the burdens and humiliations of being an Anglo coach in a farming community where his students pick crops, go to school, and then go back to work. Hired by the pragmatic principal (Valente Rodriguez), White alienates the head coach of the football team and is left with only a physical education class. But he notices that some of the students are always running from class to their jobs, and they are very fast. He decides to start McFarland's first cross-country team. He gets one of the students to help him put together a seven-man team.

White is immensely impressed with the stamina and the speed of Thomas (Carlos Pratts). The coach makes a special point of praising Danny (Ramiro Rodriguez), a chubby young adolescent who is deeply bonded with his two brothers, who are also on the team. At their first meet, however, they come in last, thanks to White's inexperience and the lack of suitable running shoes for the team. The coach adjusts their training program and they improve enough to make it to the state finals.

Working from a screenplay by Grant Thompson, Christopher Cleveland and Bettina Gilois, director Niki Caro proves once again that she has a knack for delivering rounded and uplifting portraits of communities as the testing ground for the forging of character. We still remember the struggles of the young Maori girl to step into a role of leadership in her chauvinistic tribe in Whale Rider. And Caro's depiction of a feisty miner in North Country trying to fend off sexual harassment at work in a small Minnesota community helped us to see the difficulties which must be overcome by those who are viewed as "outsiders." 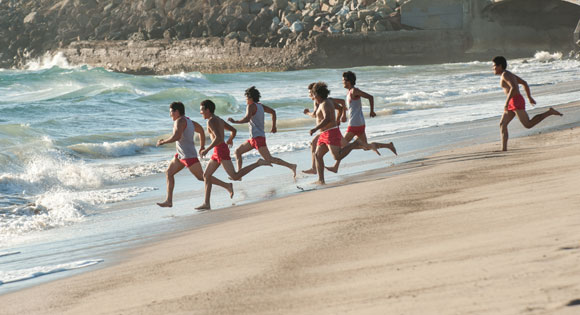 It is fascinating to watch White as he slowly begins to bond with his cross-country team. At one point, to better understand the challenges they face every day, this middle-ager joins them in the fields picking crops. He accepts the gift of a chicken from the old woman who lives next door and befriends the owner of a shop in the village who becomes an avid supporter of the runners and arranges a very special ritual when Julie turns 15. His daughter had been the first to criticize the town but she adjusts well in school and starts dating Thomas. Meanwhile, Cheryl gets to know some of the women in the community. At one point she tells him that McFarland feels more like home than anyplace they have ever lived.

Kevin Costner puts in a stellar performance as the flawed coach who teaches these Mexican-American youth to believe in themselves and to realize the extraordinary strength and discipline it takes to work in the fields, attend school, and then practice rigorous running routines. Best of all is Caro's vision of a flourishing Mexican-American community that stands by its own when they need encouragement and support.

McFarland, USA offers an engaging picture of Ubuntu ("I am because you are"). This traditional African expression reflects a philosophy of sharing, community, and generosity.

Special features on the DVD include McFarland Reflections.