Directed by Andrew Niccol
A heart-rending drama about drone warfare that proves there never has been, and there never will be, "a good kill."

Tommy Egan (Ethan Hawke) is a U.S. Air Force Major who has flown six tours of duty in Iraq and Afghanistan and 3,000 hours in an F-16. He loved every minute of it. He is one of those with the right stuff. But now his glory days are over, and he flies drones from a cramped, windowless, portable metal hut outside Las Vegas. A computer screen and a joystick are as close as he gets to the battlefield. His commanding officer is Colonel Johns (Bruce Greenwood), a quick wit who tells the new recruits, "The brass don't want to admit it but half of you were recruited in malls precisely because you're a bunch of gamers." 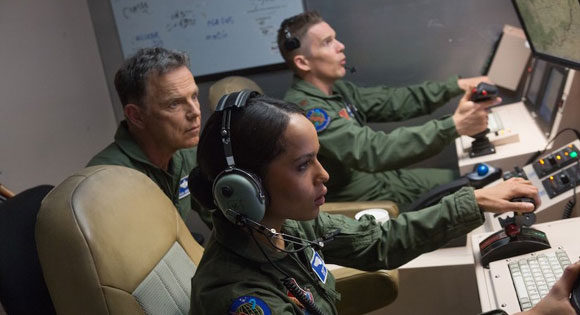 The drone team has their own slogans, such as "fly and fry" "warheads on foreheads," "splash" at a moment of impact, and "good kill" after making a damage assessment. When they have put in too many long shifts in front of the computer, Johns recommends "I & I" (intoxication and intercourse). Zimmer (Jake Abel) one of the gung ho techies in the cramped hut sees himself as a true patriot ridding the earth of Muslim terrorists. Tommy and his partner Airman Vera Suarez (Zoe Kravitz), the only woman on the team, are not so enthusiastic about their job.

Tom feels guilty that he does not appreciate what soldiers in combat zones can only dream of — the chance to go home every night to a suburban house and over the weekend put on a barbeque for his wife Molly (January Jones) and his two young children. His depression over the realization that the vast expansion of drone warfare by the Obama administration has made pilots flying planes a thing of the past deepens when he learns their team is to take orders from the C.I.A. 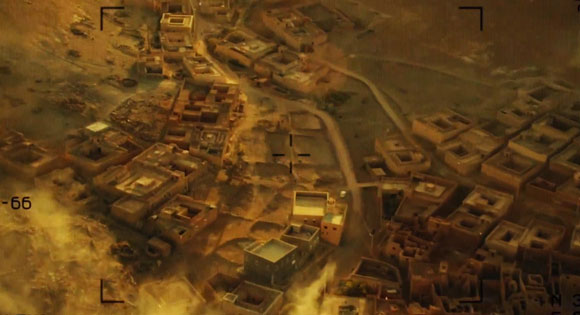 The agency's rules of engagement are less rigid than the Air Force's. "Langley" (through the detached voice of Peter Coyote) explains that it will no longer be necessary to positively identify a suspicious target to be killed. All that is needed is a "pattern of behavior." Tommy is told to fire missiles at houses where Taliban may be meeting, to target trucks even when women and children are in them, and to fire on a man returning to a shed after fertilizing a field; the rationale for the latter is that he could be storing fertilizer or making bombs there.

This expansion of a good kill leads to horrible violence. Tommy and Vera shudder whenever a child or an innocent passerby wanders into a target area, but, following orders, they have to blow them up too. In one scene, they are ordered to do a "double tap." After they have destroyed a meeting place, rescue workers rush to the scene to pull people out of the building. A second drone kills them too. Another time, after wiping out a group of suspected Taliban members, he follows their mourners to a funeral and then vaporizes that group as well. Tommy feeds his depression with alcohol and refuses to share what he is going through with his wife. 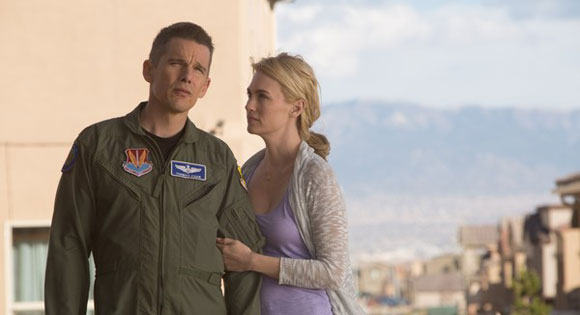 Good Kill is one of the most spiritually literate films of the year. It is directed by Andrew Niccol who was at the helm of Gattaca (1997), a rich philosophical sci-fi drama about DNA engineering. He also wrote the screenplay for The Truman Show, another extraordinary examination of the mysteries of human nature and the consequences of our interactions with technology.

In this riveting film, Niccol sets us down in a small space where we watch how the act of killing people eats away at the soul of a military man. He is sickened by the accumulated violence and appalled by his involvement in it. We've all heard the term "collateral damage" but this is the first movie to bring it home to our consciousness in so many different ways.

There is something very sad and scary about using a piece of technology in one place and being able to blow a person to smithereens in another place thousands of miles away. When acts of violence no longer register at all on the heart and the mind, then we have lost the part of our humanity that reverences the image of God in every person. We hope and pray that many will go to this exceptional movie and see for once and for all, that there never has been, and there never will be "a good kill."

R - violent content including a rape, language, and some sexuality