Embrace of the Serpent

Directed by Ciro Guerra
A cross-cultural masterpiece set in the Amazon.

"For centuries the lost world of the Amazon has cast its spell on outsiders, spawning legends and drawing to itself conquerors, adventurers, explorers and scientists. . . . Despite the monumental suffering the jungle routinely inflicted on its visitors, they still came. Something about the Amazon breathes mystery and fires imaginations."

— Kenneth Good in Into the Heart: One Man's Pursuit of Love and Knowledge Among the Yanomama

Columbian film director and writer Ciro Guerra has created a cross-cultural masterpiece that embraces important spiritual and philosophical themes such as shamanism, science, religion, colonialism, "the other," and the magical world of the Amazon. It is based on the travel journals of German Theodor Koch-Grünberg and the American explorer Richard Evans Schultes. This engaging and thought-provoking drama swings between the parallel stories of two Western scientists who are on a quest to locate a potent sacred flower — the Yakruna — which contains healing powers.

Guerra spent five years making Embrace of the Serpent which won the Directors' Fortnight prize at the Cannes Film Festival in 2015. The film begins with a mesmerizing scene of the Amazon where the black-and-white work of Director of Photography David Gallego captures the dreamlike qualities of the forests and the waters. 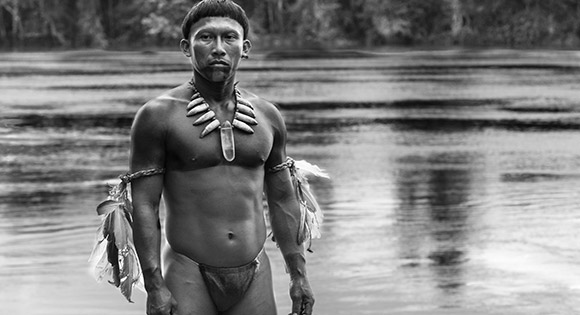 Standing on the shoreline is Karamakate (Nilbo Torres), a shaman who lives alone and is the one remaining survivor of a tribe wiped out by white invaders. In a memorable scene, we see his close connections with the natural world: he stands silently in a swarm of butterflies who seem to sense him as their companion. As he looks across the shimmering waters, a boat comes into sight carrying Theo (Jan Bijvoet) and his guide and close friend Manduca (Miguel Dionisio Ramos). Karamakate is told that the scientist is dying and only the Yakruna plant can save him.

Although the shaman hates all white men and at first refuses to help Theo, he changes his mind when he learns that the explorer has come across members of his tribe. Karamakate gives the sick man treatments: herbal medicine administered through a blowdart into the nose. But in exchange he insists that the Westerner act in accordance with a diet of no meat or fish. The wise shaman also counsels him to be courteous to plants and trees. This requires living in rhythm with the natural world rather than dominating it. 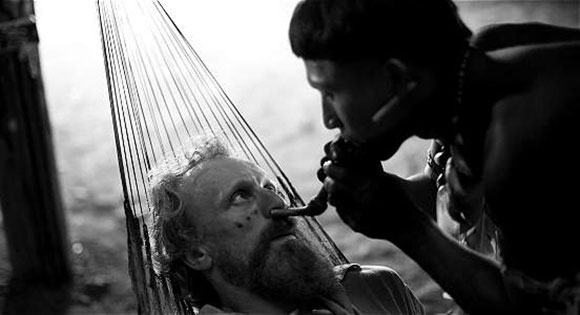 As the three men begin their journey, we have no idea where they will end up, what they will see, and in what surprising ways their adventure will change them. Theo takes a break in their trip and stops for a visit with the Cohiuano tribe. He amuses everyone with his song and dance number performed at night. But the atmosphere of conviviality is shattered when he exhibits a temper tantrum after discovering that someone in the tribe has stolen his compass. Although on the surface this seems be a minor inconvenience, for Theo it brings to the fore his fears that the Cohiuano will give up their old ways of navigating by the stars and begin to rely on new technology.

Years later, Evan (Brionne Davis), another Western scientist, has come to the Amazon to find the sacred plant Theo wrote about. We see his insensitivity when he offers an older and sadder Karamakate (Antonio Bolivar Salvador) two dollars to serve as his guide. The wise shaman sees through this swindle but is anxious about his own memory loss. His greatest fear is that he has already become a "Chullachaqui," which is an empty person with no roots or purpose. 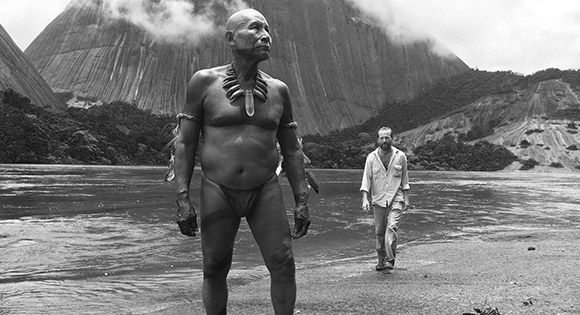 In his third feature film, Ciro Guerra presents a chilling depiction of the violence, greed, consumerism, and prejudice of the European invaders who destroyed the Amazon in pursuit of rubber and killed or enslaved over 100, 000 indigenous people. Guerra reveals the havoc wrought in this wonderland in a short vignette about a slave who is just one victim of those destroying human beings and the rain forest in their pursuit of profits through rubber.

The dark side of the European missionary culture comes across in a visit to a village where a Spanish priest regularly beats the indigenous boys. By the time Evan arrives in the same community, the European priests are gone and his message has been reformulated into a new religion with the Indians worshipping a cruel figure who they think is the Messiah. 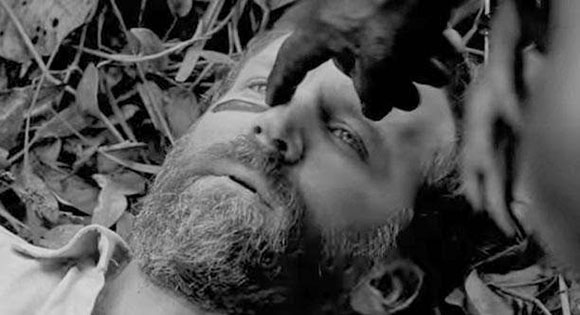 In an interview in Film Frames, Guerra says:

"I want to make films without cynicism. To me, cynicism is a disease in society, and that's why I embrace cinema's ability to let us see the world as if for the first time. I am still amazed by the beauty of every day, and find myself privileged to not have been subjugated by cynicism."

Embrace of the Serpent is the first film to be shot in Columbia's Amazon in 30 years. We are caught up in the sense lusciousness of the journey down the river; in the high regard for animal life as we watch sequences of different snake births; in the respect for plants and their healing qualities; and in the psychedelic-like hallucinations of the elderly shaman who experiences ecstatic visions.

The content rich screenplay by Guerra and Jacques Toulemonde Vidal ends on a high and holy note when the film is dedicated to all those South American indigenous peoples "whose song we never knew."

At Play in the Fields of the Lord