Directed by Stephen Frears
A multi-leveled love story about a passionate lover of music who can't sing.

Stephen Frears is a gifted English film director who is the creative force behind such winners as My Beautiful Laundrette, The Snapper, Dirty Pretty Things, The Queen, and Philomena. He is able to deftly mix comedy with tragedy and is a master of casting just the right performer for a part. It is his talent, wit, and appreciation for the bizarre that makes Florence Foster Jenkins triumph over its ethically troubling plot developments. Based on the true story of a rich New York heiress and socialite, this musical farce stars Meryl Streep giving it all she's got in the same vein as her depiction of the famous cook Julia Childs. 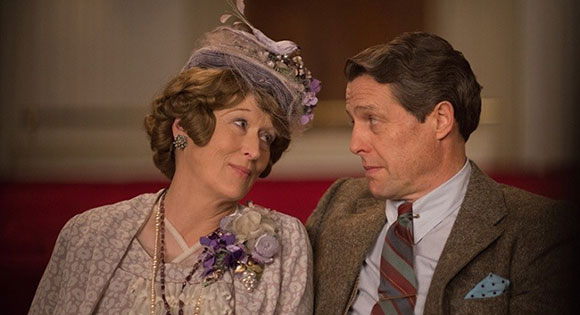 Florence Fosters Jenkins has been blessed with a large inheritance and is a big patron of the arts in New York City. But she longs to perform herself. She had studied piano but that career was waylaid by symptoms of syphilis contracted from her husband. Fortunately, she has also been blessed by her marriage to St. Clair Bayfield (Hugh Grant), a mediocre English stage actor. He has decided to devote all his time and energy to making his wife's dream of being an opera singer come true, even though she has no talent as a singer. "Love takes many forms" is the way he explains the fact that his celibate marriage compels him to live a double life with his mistress Kathleen (Rebecca Ferguson), a younger woman. 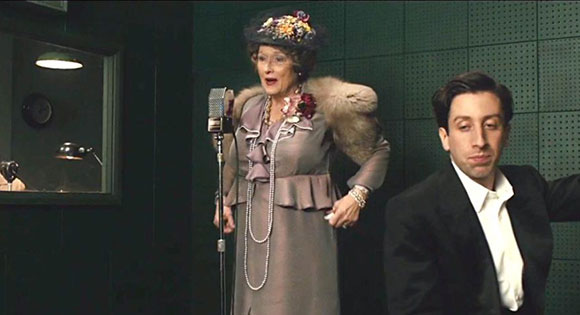 Bayfield has to adopt some less-than-honest strategies to maintain Florence's delusions that she is a talented singer. He pays a voice coach handsomely to flatter her. He hires Cosme McMoon (Simon Helberg) to be her accompanist, and after he reacts in shock to her off-key singing and high-pitched shrieks, convinces him to stay on, even though the young pianist is convinced this job will end his career. When Florence decides to sing in a concert, Bayfield populates the event with socialites, high class patrons, and critics willing to write positive reviews for a price. Florence is so encouraged she books Carnegie Hall for a concert and distributes 1,000 free tickets to servicemen home from fighting in World War II. 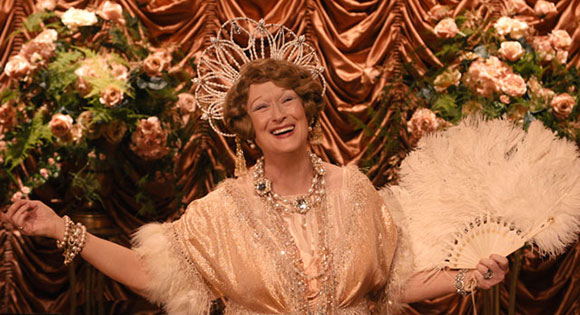 It is Frears's gift for casting and drawing out the best of his actors that turns Florence Foster Jenkins into a multi-leveled love story. Streep shines as the singer whose ardent love for opera impresses everyone around her. Hugh Grant gives an inspired performance as her devoted husband and manager; we never doubt that he really loves his wife. And Simon Helberg almost steals the movie with his quirky portrait of a young man with dreams of his own who, when he's most needed, proves also to be a loving friend.