Directed by John Madden
A tense political thriller about a smart and sassy Washington lobbyist whose primary ethic is winning.

"Winning isn't everything; it's the only thing."

Competition and being Number One is not only a capsule description of American culture but the reigning ethic of our times. In the business arena, the classroom, and the sports world, we are encouraged to defeat the competitor and show no mercy.

Many claim that this us-against-them approach builds character and promotes progress but, in reality, competition mostly results in the creation of greater stress and anxiety. It promotes selfishness, isolation, and self-doubt, and it hinders genuine communication between people. 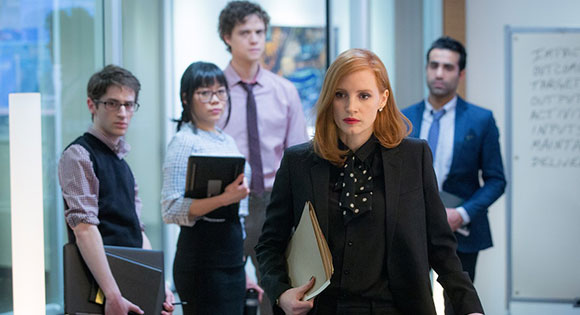 In Miss Sloane, director John Madden (Shakespeare in Love, the Exotic Marigold Hotel movies) and screenplay writer Jonathon Perera usher us into the high pressure, fast-paced, and high-stakes Beltway world of lobbying. Here we are mesmerized by Elizabeth Sloane (Jessica Chastain), a smart, sassy, intense, and ruthless lobbyist who has spent years down in the trenches with corrupt politicians and other wielders of power and influence.

Over the years, Sloane has created her own formula for winning each competition she enters: "Lobbying is about foresight, anticipating your opponent's moves, and devising counter-measures. The winner walks one step ahead of the opposition. It's about making sure you surprise them and they don't surprise you." 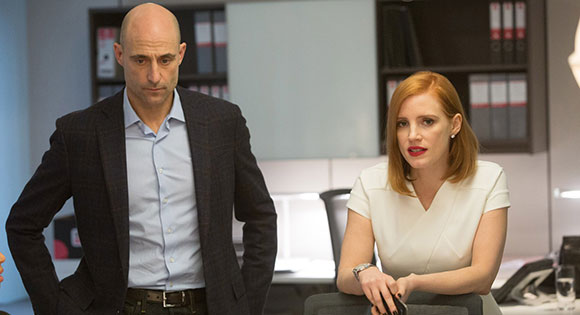 When she gags on a project suggested by a conservative kingpin (Chuck Shamata) designed to win American women over to the NRA's advocacy of guns for personal safety, she alienates both the client and her boss George Dupont (Sam Waterston). Sloane takes most of her youthful staff with her to an issues-driven and ethically conscious lobbying firm headed by Rodolfo Schmidt (Mark Strong). Enraged by her defection to the other side, Dupont and company set out to destroy her career.

Sloane rises to the challenge of competing against the large, rich, and powerful NRA but the pressure is so heated that she is unable to sleep, pops pills to stay alert, has sex with a male prostitute (Jake Lacy), and takes out her frustrations on her staff. Her worst decision involves the betrayal of a trusted African-American associate (Gugu Mbatha-Raw). Sloane's missteps come to the surface when her enemies arrange a U.S. Senate hearing to attack her. 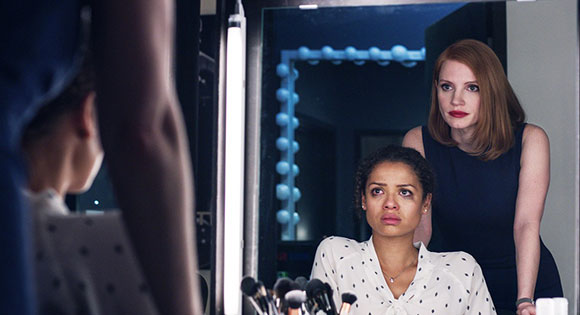 Jessica Chastain gives a zealous performance as Elizabeth Sloane. She incarnates the winning ethic in this political thriller and in the process reveals the severe brokenness of the American political system that allows influence peddling and corruption to flourish.