Directed by Evgeny Afineevsky
A documentary masterpiece chronicling the stages of the Syrian revolution and the staggering suffering of the Syrian people.

At the end of this watershed documentary masterpiece, seven-year-old Bana Alabed, who describes herself as a "peace preacher" on her Twitter account (@AlabedBana), is being interviewed about her hometown of Aleppo. Saying she wants to speak for the children of that besieged city, she ends with "We shall overcome someday." It is a remarkable statement, full of courage and hope, considering all that she and the people of her country have been through in the last six years. 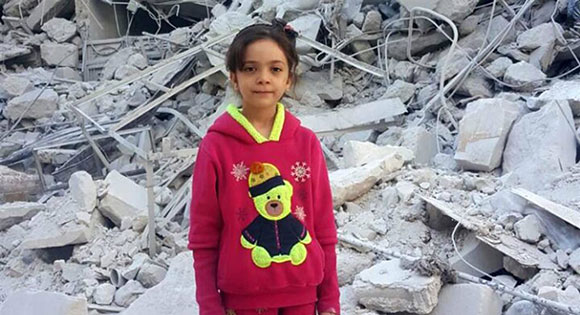 President Bashar Assad of Syria and his military forces and allies are responsible for the worst humanitarian crisis of our time. More than 600,000 Syrians have died during the civil war, and 7 million have been displaced. There are 4.8 million Syrian refugees in neighboring countries in the Middle East, and another 1 million in Europe; 2.5 million of these refugees are children. An estimated 13.5 million Syrians are in need of humanitarian aid. Some 500,000 children are trapped in besieged areas.

What has been going on in Syria over the past six years is genocide, the most heinous of all crimes against humanity. By definition, it includes acts intended to destroy a national, ethnical, racial, or religious group and includes such activities as torture; attacks on homes, hospitals, and schools; and the slaughter of innocent civilians. It is accompanied by scapegoating, indifference to human suffering, references to enemies as sub-human and disposable, and egregious violations of human rights.

This tremendously informative film from HBO's acclaimed documentary department is directed by Evgeny Afineevsky. It starts with the anti-government protests demanding basic freedoms and civil liberties as part of Arab Spring in 2011. It continues through the brutal military attacks by the regime's Republican Army and sieges of major cities, to the rise of ISIS and bombardments by Russian planes, through the unprecedented exodus of Syrian men, women and children fleeing violence and seeking sanctuary and work in other Middle East and European countries. The footage comes from journalists and also from activists with cell phone cameras from the midst of the revolution. 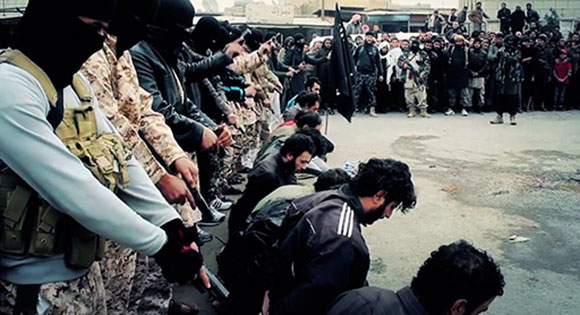 The unflinching type of filmmaking puts viewers in the uncomfortable position of witnessing the savage and bloody deaths of Syrian citizens, many of whom started out as protestors and ended up as members of the Free Syrian Army. We hear from some of the children of Daraa, who were tortured by the regime after they spray-painted an anti-Assad slogan on the walls of their school. We witness the peaceful demonstrations led by Ghiath Matar, called a "young Gandhi," and then view his horribly disfigured dead body as his family talks about their loss. Throughout this brutal civil war President Bashar Assad argues that those who oppose him are terrorists who must be eradicated like germs. In order to achieve that goal, his troops use chemical weapons.

The film footage of unrelenting violence heaped on the Syrian people by Assad's regime is morally staggering. And then it gets worse. ISIS moves in and begins executing members of the Free Syrian Army. Russia comes in on the side of Assad and bombs homes, schools, and hospitals with a new level of destructive weaponry, including cluster and phosphorous bombs. Assad, ISIS, and Russia form on unholy trinity asserting their weapons of war, authoritarian power, and cold-blooded assassinations. The only source of support for the Syrian people are the "White Helmets," a civil defense group of teachers, doctors, and other civilians who pull as many people as possible from the rubble. 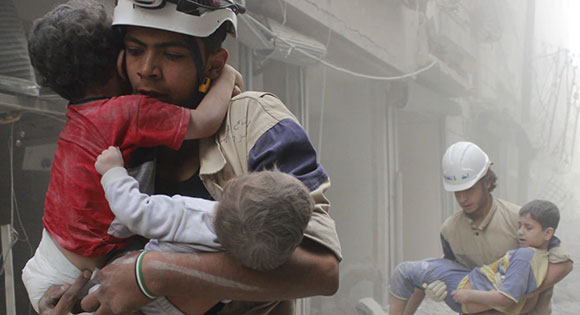 Afineevsky supplements the you-are-there material with commentary by resident journalists, human rights defenders, and representatives of humanitarian operations in Syria. Especially poignant are the commentaries throughout by Syrian activist Kholoud Helmi; she talks about the disappearance of her brother, the steps by which the revolution grew and changed, and the staggering suffering of her people.

It is fitting that the filmmakers choose to focus their interviews only on children in the last section of the film which covers the journeys of refugees fleeing the nightmare in Syria. Children's voices punctuate this history lesson, and it is heartbreaking to realize the trauma they are enduring and have witnessed. One girl describes what it was like during the blockage of her city; she survived, but people all around her were starving to death. Fearing she would die, she wrote her will:

"I ask you my mother to remember me,
prepare my bed every night
and remember my continuous smiles.
And you my sister,
tell my friends that I died from starvation.
And you my brother,
remember when you and I were hungry.
Oh angel of death, go ahead and catch
my soul so that I can eat in paradise.
Don't worry, family.
I will eat for you in paradise as much as I can." 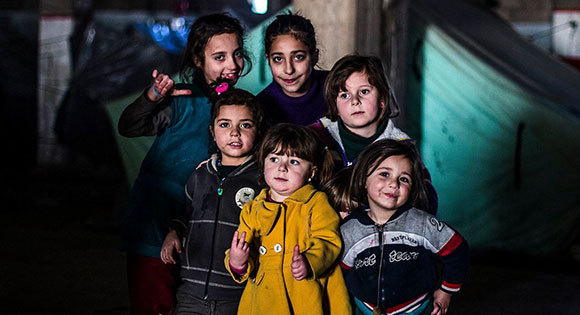 You may be tempted to avoid this film, especially when you read that there are scenes of the injured (including the little boy waiting in the ambulance, a video that went viral), people being tortured and executed, and mourners around dead bodies (including the boy who washed up on the beach, in that iconic photo). But we owe it to ourselves to learn about what has happened and is happening today in Syria. And we owe it to the little girl who thought she would starve to death and to young Bana who believes they will overcome to bear witness to their suffering.