Directed by John Carroll Lynch
The poignant story of the spiritual journey of a nonagenarian facing changes in his daily life.

"Character is refined in the laboratory of aging. You don't get it right the first time. Each day brings another opportunity to strike the right mix, neither too malleable nor too rigid, neither too sweet or too dry, giving the older character its power to bless with tough-minded tenderness."

It is such a pleasure to experience an independent movie like Lucky where every scene and image, every word and sound seems to be a perfect fit with the story and the setting. This well-realized and well-acted drama marks the directorial debut of John Carroll Lynch who has put all these ingredients together in ways that touch both our hearts and our souls.

The screenplay by Logan Sparks and Drago Sumonja reveals the challenges and the setbacks of old age — bodily changes, fear of falling, losses, and impending death. It is also often a time of changes in our relationships, our comfortable habits, and our spirituality. 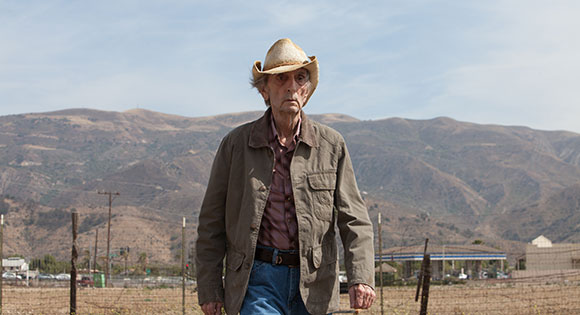 We were moved to tears a number of times during Lucky and were amazed by the authenticity and poignance of Harry Dean Stanton's last performance — he died at the age of 91 shortly before this film's release.

As we thought about the film's themes, we recalled the thesis of psychologist James Hillman's masterwork The Force of Character and the Lasting Life: he describes the last stage of life as a time when our character is refined. We have chosen some thought-provoking quotations from the book as probes to the adventure of aging.

"Nothing more tedious than practicing your scales or mumbling your beads. Yet the accomplishments of art, the efficacy of prayer, the beauty of ritual, and the force of character depend on petty repetition any
instant of which, taken for itself alone, seems utterly useless."

Lucky (Harry Dean Stanton) is a World War II veteran who lives a simple life in a small Arizona desert town. He has never been married and finds it helpful to structure his solitary existence around a set of repetitious routines. He enjoys being alone, which he asserts is not the same thing as being lonely. 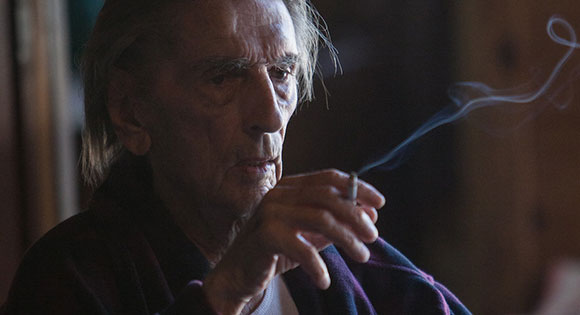 Lucky gets up each day, washes, dresses, and does five yoga exercises. He smokes a cigarette (a pack-a-day habit since he was a teenager) before going into town. He stops in at the local coffee shop where he sits in the same place at the counter doing a crossword puzzle while sipping his coffee. The waitress (Yvonne Huff) knows just what he needs and the diner's owner (Barry Shabaka Henley) comes over to chat for a few minutes. He is irritated by his friend's smoking addiction but can't convince him to stop.

After picking up milk and cigarettes at a Mexican grocery, he walks through the town, then goes home to watch his favorite game shows. At night, he visits the local bar owned by Elaine (Beth Grant) and her husband Paulie (James Darren). Another regular is Howard (David Lynch), who is grieving the disappearance of Roosevelt, his beloved pet tortoise who has run away.

“Perhaps we must come apart in order to depart so we can appreciate what has been carrying us for so many years. … Before the body becomes a corpse in a casket it seems to have a lot to say to the soul. It begins to act up, break down, and speak out.”

While working on a crossword puzzle, Lucky is led into an inquiry into the word "realism." He learns it is a "thing" that enables one to see "what really exists and to deal with it accordingly." This direct approach to life appeals to him.

While at home, Lucky falls down. This surprises him, though it probably shouldn’t. Falling has long been considered an inevitable byproduct of later life; a third of people 65 or older fall each year, and fear of falling is rampant among older people. 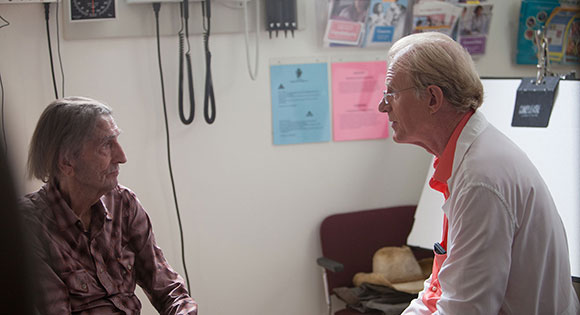 Lucky decides to visit his doctor (Ed Begley Jr.). He learns that the fall has not resulted in any injury to the head or body. His physician marvels at Lucky's excellent health given a lifetime of smoking. The only thing he can tell his patient is that he is old.

“Once we learned from the fox and the hawk; now the walrus, the tortoise, and the moose in the dark bog are our mentors. The adventure of slowness.”

At the bar, Howard talks about his lost tortoise. He declares, "There are some things in this world that are bigger than all of us and a tortoise is one of them!" There is a lot of ancient mythology and symbolism associated with the tortoise, a four-legged reptile who moves slowly across desert regions. He or she can live for more than 100 years, making a connection to long-lived people everywhere. Howard notes that the tortoise’s shell is protection during life and its coffin upon death. He observes that this animal goes through life with a very concrete reminder of death on his back. That's something for Lucky and others to think about.

“The AARP likes its elders peppy but not peppery, vigorous but not vociferous. The actual fire of emotions is denied, as if old age were merely a time of recollection in tranquility. … Later years find us often leaning toward the left as we are more often left out and left behind. … Our minds have begun to move down crooked paths and to engage in strange encounters with nonconformist thoughts and feelings. We find ourselves becoming a fellow traveler of the oppressed, the underdogs and marginal.”

It is fascinating to watch Lucky become more critical and eccentric in various encounters with those who rub him the wrong way. He finds the bar owner's authoritarianism irritating, and to challenge her he lights a cigarette next to the "No Smoking" sign. He clashes with a young insurance agent (Ron Livingston) whose know-it-all attitude turns him off. But when the agent shows his emotional vulnerability, Lucky respects him and honors his goodness. Here a person considered to be an enemy turns into a friend.

Two crucial and emotionally inspiring scenes depict Lucky's decision to forge his character by becoming a fellow traveler of the oppressed, the underdogs, and the marginal. In the first, a friendly World War II veteran (Tom Skerritt) tells him a story about a battle in the Pacific. He still remembers a young girl who was soon to die yet had a huge smile on her face. Later, Lucky attends a fiesta for a Mexican boy's birthday. He opens his clinched heart and serenades the gathering. 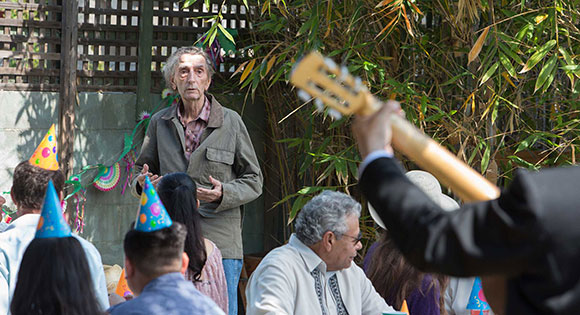 The promotions for this film describe it as a "spiritual journey." And it is. Interestingly enough, Lucky, who starts off declaring that there is no such thing as a "soul" comes to an understanding of some of the key tenets of Buddhism. He is able to embrace impermanence, not knowing, and smiling at one’s fate. That’s another way this is a rare film indeed.