Call Me by Your Name

Directed by Luca Guadagnino
An astonishing drama of sexual awakening that explores the exhilarations and anxieties that accompany first love.

"Please think about your own first love. Do it slowly, picturing how it came about, where it took place, what brought you to that moment. Recall that experience and look at it calmly and deeply, with compassion and understanding. You will discover many things you did not notice at the time. . . . Your first love is still present, always here, continuing to shape your life. This is a subject for meditation."

— Thich Nhat Hanh in Cultivating the Mind of Love

It would not be a stretch to describe Call Me by Your Name as a coming-of-age drama, a tale of adolescent sexual awakening, a portrait of the confused feelings that accompany sexual experiences, and a salutary portrait of grace passed from a sensitive father to a son.

The story takes place in Crema, a small town in northern Italy where the summer beckons its inhabitants to bike rides, short shorts, swimming and splashing water, fresh food and sumptuous dinners, and hazy and lazy days where it is possible to savor the sights and sounds of the natural world. 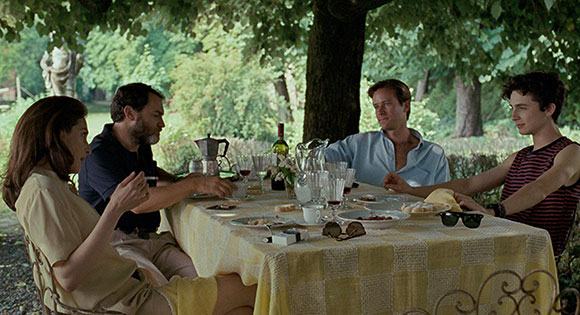 Elio (Timothée Chalamet) is a 17-year-old musical prodigy who is spending the summer at his family's villa with his loving father (Michael Stuhlbarg), a scholar of Greco-Roman history and art, and his adoring mother (Amira Casar). Elio's life is transformed by the arrival of Oliver (Armie Hammer), a graduate student, to work with his father. This friendly and mysterious 24-year-old American is staying for six weeks at the villa in the room next door to Elio's.

Although there is an immediate attraction between the adolescent and this handsome stranger, at first they don't act upon it. Oliver actually cautions Elio that they should not talk about such things. The teenager turns to a girl he has known since childhood, and they have sex. But clearly he wants something to happen with Oliver, and their brief touches lead to frolicing in the lake, long bike rides, and eventually evenings in bed together. 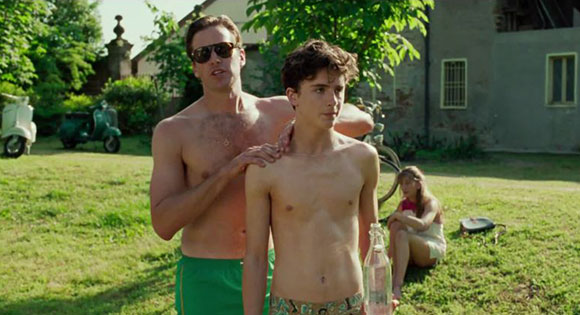 The screenplay by James Ivory is based on a 2007 novel by André Aciman which focuses on both the exhilarations and the anxieties that accompany first love. In a tale told at the villa, a Prince asks a Princess, "Is it better to speak or to die?" Those are the kinds of questions that Elio is wrestling with. He's conflicted: he wants to sort out his feelings, yet he also just wants to go with the moment.

What is most remarkable about Call Me By Your Name is that as this first love unfolds, while there are moments when Elio feels embarrassed and self-conscious, guilt (thinking you have made a mistake) and shame (thinking you are a mistake) are not part of the picture. You may look for "villains" to stifle Elio's love — a parent, his girlfriend, visitors to the villa — but they just don't manifest. 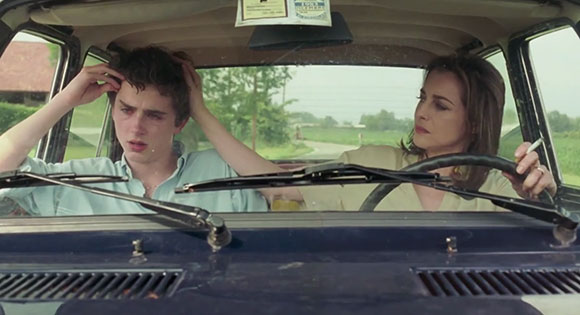 In the most important and dramatically significant scene, Oliver has left and returned to the States. Elio's father speaks with him intimately about his relationship with Olivier. We are going to quote what he says here (with the highest recommendation that you see Michael Stuhlbarg's delivery of it) because this is perhaps one of the most beautiful examples of grace and love you will ever see in a movie.

“Look," [his father] interrupted. "You had a beautiful friendship. Maybe more than a friendship. And I envy you.

"In my place, most parents would hope the whole thing goes away, or pray that their sons land on their feet soon enough. But I am not such a parent.

"In your place, if there is pain, nurse it, and if there is a flame, don't snuff it out, don't be brutal with it. Withdrawal can be a terrible thing when it keeps us awake at night, and watching others forget us sooner than we'd want to be forgotten is no better.

"We rip out so much of ourselves to be cured of things faster than we should that we go bankrupt by the age of thirty and have less to offer each time we start with someone new. But to feel nothing so as not to feel anything — what a waste!”

"I never had what you had. Something always held me back or stood in the way. How you live your life is your business. But remember, our hearts and our bodies are given to us only once. Most of us can't help but live as though we've got two lives to live, one is the mockup, the other the finished version, and then there are all those versions in between. But there's only one, and before you know it your heart is worn out, and, as for your body, there comes a point when no one looks at it, much less wants to come near it. Right now there's sorrow, I don't envy the pain. But I envy you the pain." 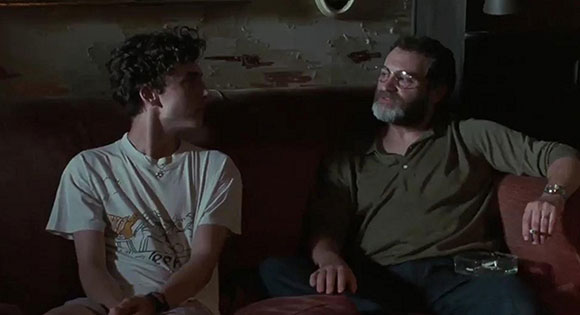 Call Me by Your Name is one of the Most Spiritually Literate Films of 2017 and we agree with those who have tipped their hats to Timothée Chalamet for the best breakthrough performance of the year.

Finally, we can't help but add a thought about the title. At a key point in their relationship, Elio and Oliver decide to address each other using the other's name. Elio becomes Oliver, and Oliver becomes Elio. And we get the message that through love they are becoming one. As Rumi put it,