Directed by Rebecca Miller
A thoughtful and ethically illuminating documentary about the famous playwright.

This documentary debuted on HBO on March 19, 2018; check local listings for repeats in your area or see it on-demand through HBO Go.

Arthur Miller (1915 - 2005) was a great advocate of dramas of social conscience where characters struggled with themselves, with others, and with the challenges of the American Dream. At the early age of 33, he was heralded as the top American playwright for Death of a Salesman.
It opened on Broadway in 1949 and won the Pulitzer Prize, the New York Drama Critics' Circle Award, and the Tony Award.

This thoughtful and enlightening documentary on Miller's life and work is directed by his daughter Rebecca Miller, a talented filmmaker. She shines a light on his ambitions, his yearning to change the direction of America, his political ideals, and his penchant for infusing his plays with passion, guilt, suffering, and redemption. In addition to commenting on the remarkable success of Death of a Salesman, he speaks with pride about his other triumphs, including The Crucible (1953) in which he used the a story about the Salem witch trials to address the terrible scourge of McCarthyism in the 1950s. He also has a special place in his heart for A View From the Bridge (1955) which is animated by themes of obsession and betrayal. 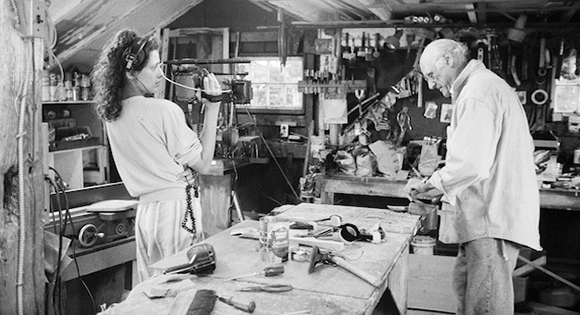 Miller films her father reminiscing as he works on carpentry projects in his studio or walks on his 350-acre farm in Connecticut. He recalls his childhood where his father, an illiterate Polish immigrant, was overshadowed by his mother, an avid reader who was often the life of the party. His father's business success afforded them a nice lifestyle in Manhattan until the stock market crash of 1929, after which they moved to Brooklyn.

The filmmaker interviews members of her family, including a step-brother and step-sister from Miller's first marriage. She also solicits commentary on her father's career and literary accomplishments from playwright Tony Kushner and director Mike Nichols. One of the most disappointing events in Miller's career was the rift with his close friend and collaborator Elia Kazan (who staged All My Sons, Death of a Salesman, and After the Fall) when Kazan testified before McCarthy's House Unamerican Activities and identified Communists he knew. Miller was also called before HUAC but refused to give them the information they wanted.

Perhaps the most flamboyant relationship in Miller's life was his four-year marriage to Marilyn Monroe. Discussing her in the film, he recalls telling her that she was saddest person he'd ever encountered. He wrote The Misfits especially for her but despite her performance in it, she was unable to shake the lack of self-esteem and the demons of self-destruction that had haunted her all of her life. After their divorce, Miller probed their dramatic relationship in his 1964 play After the Fall.

In 1962, Miller married Inge Morath, Rebecca's mother. With this outspoken and unconventional Austria-born photographer, the playwright found the happiness which had eluded in in his other marriages. A family secret is revealed near the end of this documentary.

Arthur Miller: Writer vividly conveys the challenges and inner rewards of the art of theatre. After his staggering early success, this playwright experienced a period in the 1970s and 1980s when his weighty dramas were rejected by critics and considered out of synch with younger audiences. Miller wrote 20 plays between 1968 and 2004 and was astonished by the poor response to them: "I didn't feel there was anybody out there who was interested. I felt I was shouting into a barrel."

Yet Miller persisted. He is emboldened when Death of a Salesman is given new life with a television production starring Dustin Hoffman. His early plays are also staged in China and elsewhere overseas. He predicts, however, that this kind of attention won't last.

This documentary celebrates the mysteries of perseverance and synchronicity which carry all creative masters into fresh fields of wonder after enduring obstacles, depression, and fears that they have lost the magic to connect with others.