Directed by Matthew Heineman
The life and work of an award-winning female war correspondent whose zeal for the truth made her into a fearless person.

According to a 2015 United Nations Development Programme-backed report, the war in Syria has plunged 80% of its people into poverty, led to massive economic losses, and cost 12 million people their primary source of income. The country's population has dropped by 15% with 6 percent of the population killed or injured during the conflict. Syria now has the second-largest refugee population in the world after the Palestinians. And those figures are from three years ago. Since then the Syrian catastrophe has morphed into a humanitarian nightmare with no simple solutions. At any one time, there are multiple combatants, including the forces supporting the government of Bashar al-Assad, including the Russians and insurgent groups, some of which have been supported by the United States and other allied countries; the Islamic State (ISIS) moved into Syria from Iraq and began battling all other groups. 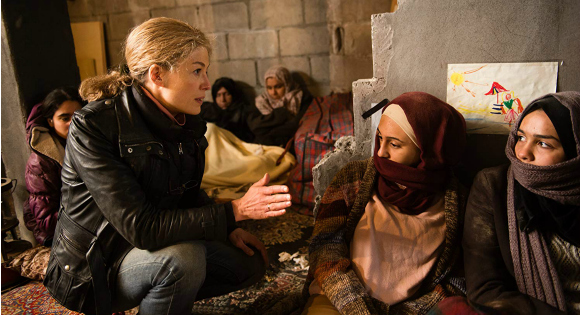 In order to get a real sense of the very dangerous dimensions of the conflicts raging in Syria, we suggest you watch A Private War. This intense biopicture focuses on Marie Colvin, an American war correspondent who worked for the British newspaper The Sunday Times. Throughout her career, she won various medals and honors, but she needed alcohol and the elixir of excitement to make it to the next day.

This involving film puts us in the midst of war with Colvin (Rosamund Pike). That's one of the goals of her work, she explains. "You have to go where people are being killed and risk being killed to make that suffering part of the record." She calls her reports the "rough draft of history," bearing witness to what happens in war with the hope that her reporting will help her readers to care. 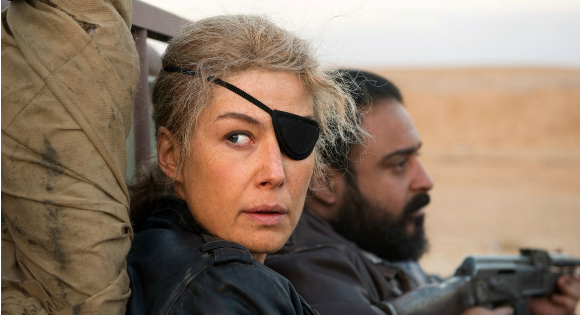 But to accomplish these goals, she has to be fearless, even over the objections of her editor (Tom Hollander). In various hotspots across the world, her mettle is repeatedly tested. After she loses the sight in her left eye due to a blast while covering the civil war in Sri Lanka, she wears an eye patch. With her photographer, Paul Conroy (Jamie Dornan), she discovers a mass grave near the Iraqi border, providing closure to many distressed families. In Libya, she lands an interview with Muammar Gaddafi before his horrific fate.

But her reporting from the frontlines takes a heavy toll. After seeing too much of the fragility of the human body, she suffers from PTSD and is hospitalized. Still, admitting that she feels most comfortable when she is in the thick of things, Marie returns to the field, this time going to Homs in Syria where some 28,000 civilians are trapped under heavy bombardment. From a bunker she manages to file a last report with CNN. 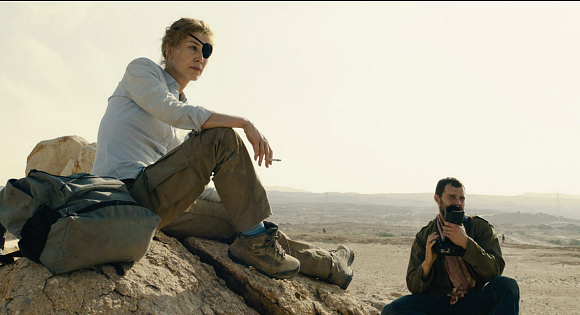 Director Matthew Heineman brings intensity to the battle sequences and draws out a strong and empathetic performance from Rosamund Pike as a zealous woman who invests her entire being in the assignments she is given. A Private War begins and ends in Syria where some 500,000 civilians have died since 2012. Marie Colvin and French photographer Remi Ochlik died in Homs on February 22, 2012; she was 56.