The Name of the Rose

Directed by Giacomo Battiato
A medieval whodunit with moral firepower that reflects a reverence for books.

Umberto Ecco (1932 - 2016) wrote his first novel, The Name of the Rose, in 1980 when he was 48 years old. It has sold over 50 million copies. The scholarly author insisted upon calling the story a "whodunit" and was amused by the worldwide response to his detective story set in 1327 in an isolated Benedictine monastery.

A feature film directed by Jean-Jacques Arnaud and starring Sean Connery, Christian Slater, Michael Lonsdale, and F. Murray Abraham was released in 1986. We were very taken by this screen version of Ecco's masterpiece. 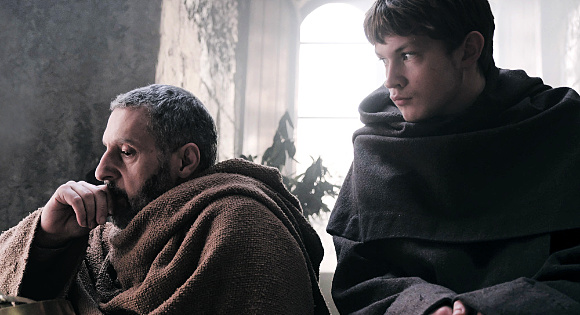 Now almost four decades after the release of the dark and chilling novel, Giacomo Battiato has written and directed an eight-episode TV version which is a joint German-Italian production. He has deepened and enriched The Name of the Rose by casting John Turturro in the lead role of the Franciscan monk William of Baskerville who is an intellectual, a believer in reason, a mentor to a young novice (Damian Hardung), and a forerunner of Sherlock Holmes.

Arriving at a Benedictine monastery for a conference, William is asked to investigate the death of one of the monks who had been working as a book illustrator. Then another monk is found dead. Concluding these were murders, the visitor tries to figure out motivations and behavior. All the while, he has to evade the traps set by a ruthless inquisitor, Bernard Gui (Rupert Everett), sent by the Pope to rid the Church of heretics. 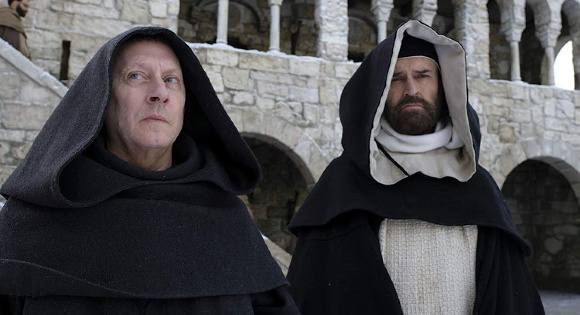 It's not surprising that this mystery emerged from the imagination of Umberto Ecco. Looking back over his career, he can be seen as a modern Renaissance man and a polymath. He spent 30 years in the academic world teaching philosophy, semiotics, medieval history, and literature. Brother William seems created in the author's own image, a mind-tripper who is fascinated by both the big picture and the little, hidden details.

Nor is it surprising that this story takes place in a monastery known for its library. The shelves are arranged as a maze, and it is off-limits to everyone but the librarians. The other monks, who work all day making copies of the books, are both filled with pride about the library and scared by frightening stories about what could happen there.

When Ecco was a boy, he was awed by his grandfather's impressive library. Calling books "the corridors of the mind," Ecco has assembled his own rare book collection over 50,000 volumes displayed in two of his homes. Lovers of books ourselves, we find them to be passports to undiscovered lands, offering us primal contact with saints and seers who, through plain and elaborate pages, bequeath to us their wisdom. We would agree (and Ecco would too) with Thomas Kempis who wrote: "In all things I have sought peace, and nowhere have I found it except in a corner with a book."