Directed by Spike Lee
A troubling portrait of the Vietnam war and its toxic impact on so many black soldiers who suffered there.

Black veterans of the Vietnam War were subjected to the same racist prejudice, inequality, and shabby treatment as they had experienced back home in the United States. During basic training, they were on the bottom of a military caste system. By 1967, black soldiers made up 16.3% of those drafted and 23% of Vietnam combat troops, despite the fact that African-Americans comprised only 11% of the civilian population of the country.

The anger and disillusionment of black veterans increased when Dr. Martin Luther King, Jr, one of the few who spoke out against the war, was assassinated. Here they were, fighting for America, at a time when their brothers and sisters at home were fighting for their basic rights. In Vietnam, their mood grew even more melancholy when they listened to the North Vietnamese radio propagandist known as "Hanoi Hannah" who regularly was right on target with her critique of American racism. 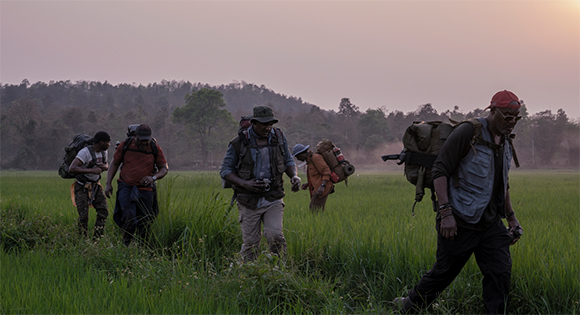 These realities provide the backstory for Da 5 Bloods, Spike Lee's hard-hitting, well-acted, and prophetically daunting film which follows in the spirit of Miracle at St. Anna (2008) about four black Buffalo soldiers in World War II, and BlacKkKlansman, a stylish satirical indictment of the legacy of white supremacy. This time out, the ambitious director makes the most of the inventive screenplay by Lee, Danny Bilson, Paul De Meo, and Kevin Willmott; the emotionally rich musical soundtrack by Terence Blanchard; and an astonishing performance by Delroy Lindo as Paul that brings to mind the theatrical range of Shakespeare's raging and furious character King Lear.

This drama revolves around the return of four members of an American platoon -- Paul (Delroy Lindo), Melvin (Isiah Whitlock, Jr.), Eddie (Norm Lewis,) and Otis (Clarke Peters) -- to Vietnam 50 years after they fought there. They are on a secret mission which they have been dreaming about for years: to find and bring back the body of Norman (Chadwick Boesman), their heroic leader who was shot down in battle, and to claim the gold bars they found in a downed plane they had buried nearby. Joining them is Paul's son David (Jonathan Majors) who is concerned about the effect of this trip upon his father. Father and son have had their issues over the years, but as the story unfolds, it is clear that all those mixed feelings are topped by deep love. 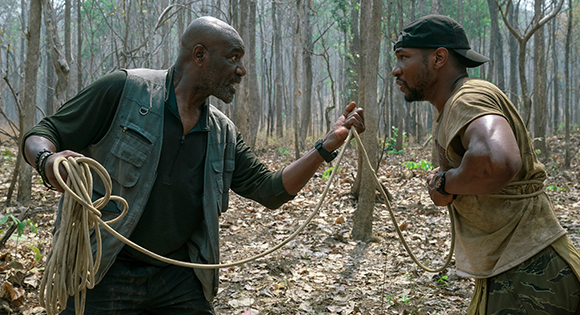 As these weary black men set out by themselves into the jungle, they are animated by different motives. For Paul it is all about Norman, who has haunted his dreams. The others are more interested in finding the gold, which they believe is the equivalent to reparations the U.S. owes them for all their suffering. Norman had told them the gold should be used to better the lives of black people back home, and this motive is also discussed.

The war is never far from them as the director includes PTSD-induced flashbacks of battles, and they meet with the children of Vietcong they may have killed. Paul's lack of trust for anybody outside the Bloods propels the action as they are attacked by Vietnamese officials who want the gold, a Frenchman who has offered to convert the gold into currency, and three members of a nonprofit organization who are working in the field locating and defusing land mines. 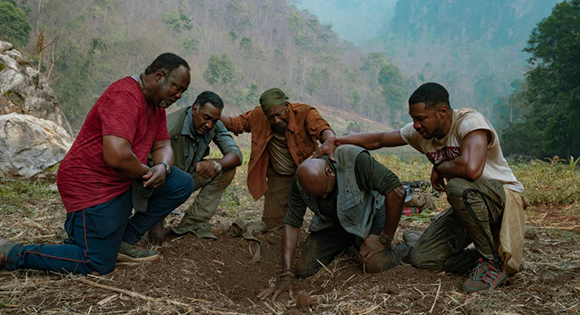 This is a powerful and involving film, with many moments in which the dialogue will get you thinking about the black experience in war and at home. Some of the most memorable scenes are when Paul speaks to the camera directly, revealing the long-term effects of grief, guilt, and the need for forgiveness. Spike Lee's Da 5 Bloods is one of the most poignant and troubling films ever made about war and its toxic impact on the black soldiers who were torn and twisted by it. Released now, when Black Lives Matter demonstrations are taking place across the country, it could not be more timely or needed by those seeking greater understanding.