Directed by Ben Lawrence
A rich and immersive drama about two men dealing with the baggage of their pasts as they try to keep their friendship and marriages together.

"You have opened a door to the past . . . I must go through it," says Daniel (Hugo Weaving), a veteran war photographer who is working on an important retrospective collection of his work in many war zones. Although calling himself an "infidel" he does believe in conscience and altruism. Perhaps that is why he responds to Sebastian Aman (Andrew Luri), a South Sudanese taxi driver who wants him to take pictures of his men's choir made up of refugees. The music seems to sooth his soul since he is troubled by images of war, nightmares, and severe headaches.

Daniel and his loving partner Josie (Hayley McElhinney) are still grieving the infant death of their daughter that also revealed a medical condition making another birth dangerous for Josie. When she becomes pregnant again and initially keeps it secret from Daniel, the trust and intimacy between them is threatened.

In this debut feature film, director Ben Lawrence has a created a spiritually rich and immersive drama from a screenplay cowritten with Beatrix Christian. Unfolding gracefully in Sydney, Australia, Hearts and Bones gives us ample space to deal with the secrets, the reversals, the moments of forgiveness, the disappointments, and the fragile and vulnerable wounds we inflict on one another through both marriage and friendship. 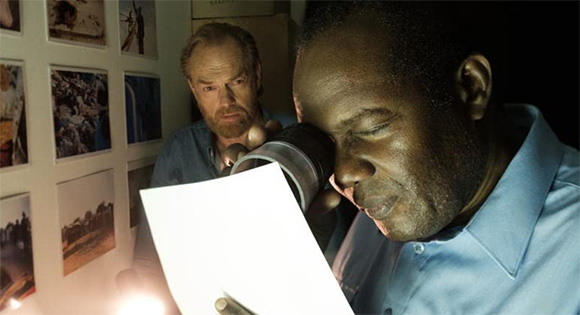 Daniel and Sebastian are finding middle age to be a stage of life with more roadblocks than stepping stones. Both of them are dealing with their pasts. Daniel is coping with the cumulative effects of spending so much time in war zones. Sebastian is trying to build a new life in Australia and hasn't even told his wife Anishka (Bolude Watson) about the massacre in his village in South Sudan 15 years earlier. He has forged ahead on the purchase and construction of a new house; much to his dismap, Anishka, who is pregnant with their second child, does not share his dream. Drained by the sudden lack of connection with their wives, the two men clash when the refugee wants the photographer to exclude from his exhibition pictures of the village massacre. 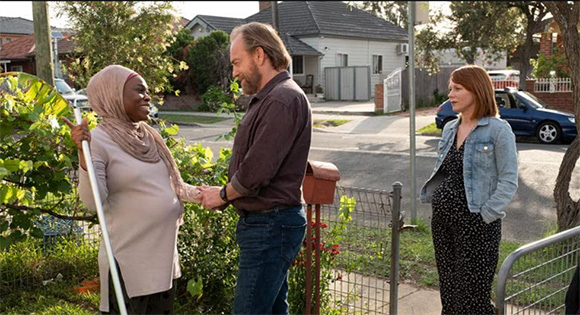 Watching all four characters work to find their ways back to each other is a wonder to behold. Bolstered by four astonishing performances by Hugo Weaving, Andrew Luri, Hayley McElhinney, and Bolude Watson, Heart and Bones is one of the Most Spiritually Literate Films of 2020.