Directed by Jonas Poher Rasmussen
A bold animated film about a refugee and the search for home.

"What does the word 'home' mean to you?"
"Home? It's someplace safe. Somewhere you know you can stay, and you don't have to move on. It's not someplace temporary."
-- Interview of Amin in Flee

This Danish documentary uses animation and archival film footage to effectively tell the true story of Amin Nawabi, a childhood friend of the director, Jonas Poher Rasmussen. Each section starts with an animated sequence in which Amin speaks to an overhead camera; animated sequences then take us back to the key points of his journey to find a safe home. .

Amin grows up a happy child in Kabul, Afghanistan, the youngest of a family of five. His father is a military officer, and his mother takes care of the two daughters and three boys. Fear takes a strangle-hold on the entire family when the U.S.-backed heavily armed Mujahideen defeat the Soviet-backed government and take control in Kabul. Amin's father is taken away and never seen again. 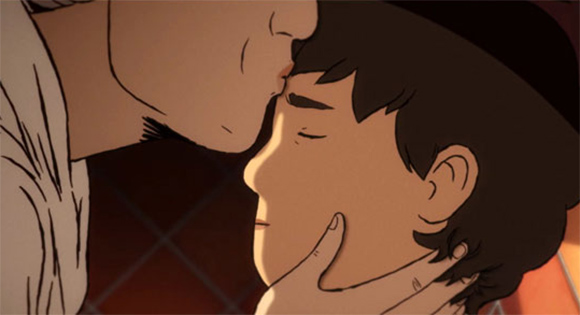 The family now faces some difficult decisions. The oldest brother does not want to be conscripted into the army, and so he flees to Sweden. From there, he regularly sends money to help the rest of the family get out of Afghanistan. The two girls go first and after enduring a harrowing trip packed inside a container do get to Europe. Amin, his brother, and mother go to Moscow. Russia is a terrible place for refugees; the economy is in shambles and people are starving. When their visitors' visas expire, they live illegally, waiting for a chance to escape to Europe.

The family arranges with some traffickers for Amin to get to Denmark, but here he is forced to tell a lie that will affect him all his life. To make his asylum claim more poignant, the teenage is instructed to say that his whole family is dead. For 20 years he keeps the truth of his family scattered around Europe secret, even from the man he is about to marry. Throughout, his being gay has made his journey to safety more difficult. 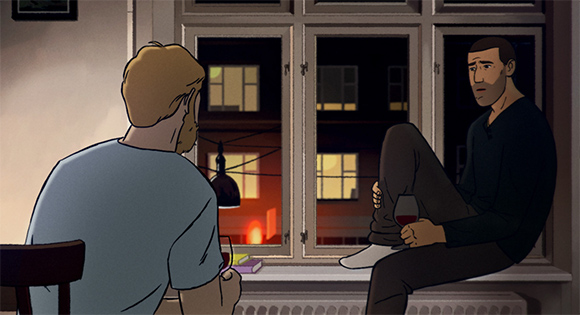 Perhaps the most chilling and frightening incident in Flee is when Amin and his family buy passage on a ship crossing the Gulf of Finland from Russia. They are crammed in the lower level of the boat with many others who are sick and dying. When a cruise ship carrying tourists appears on the horizon, the refugees are ecstatic. But the ship's captain announces that the authorities have been notified and are coming to take them back to Russia. While the refugees wave and cry out for help, the tourists on deck take photographs of them before the ship moves on. This sad scene stands along other historical moments when refugees and victims of totalitarian regimes have abandoned rather than shown compassion.

Director Jonas Poher Rasmussen has fashioned an emotionally resonant film that will increase your capacity for empathy for those anywhere seeking a home. It stands alongside Waltz with Bashir as a work of art that is thematically rich with its exploration of home, family, story, homosexuality, suffering, and freedom.